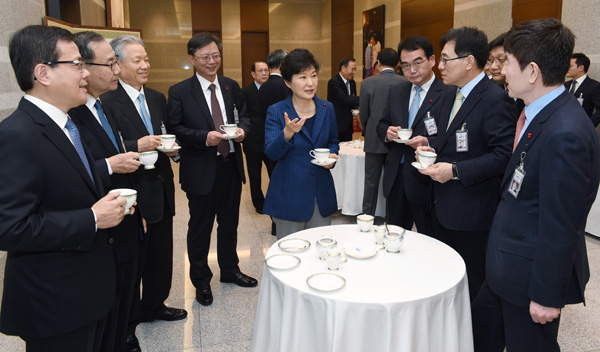 President Park Geun-hye said on Monday that the government would overhaul the financial structure for local governments, including slashing the grant traditionally earmarked for local education offices, as tax income will not increase in proportion with the funds needed for welfare.

“It is time to look into whether the nation’s financial support system is hurting local governments’ autonomy. And should there be any evil practices, those should be overhauled,” the president said in a meeting with her secretaries and newly appointed presidential advisors at the Blue House.

Her comments follow mass outrage last week, when salaried workers discovered that their tax bills for 2014 were much higher than anticipated ? the result of a tax bill amendment at the end of 2013 that the government sought to collect more money for the country’s welfare programs.

During her presidential bid in 2012, the president promised “welfare without increased taxes.” She initially mentioned in the meeting the need to consider reforming the education finance grant, part of the government’s budget that goes to local education offices to support elementary, middle and high schools. The grant makes up 20.3 percent of domestic tax.

Even though the student population has declined due to a decrease in the entire population and many schools have merged or shuttered, the education finance grant has remained intact, the president noted, adding that a review is necessary for whether the grant should be adjusted.

The Ministry of Education subsequently released a statement saying that it would assess how efficiently each local education office uses its funding and allot grant money in accordance with the results of the evaluation.

An association of superintendents across cities and provinces nationwide instantly protested the government’s move. “Even though the number of students has diminished, the same is true for the number of students per class - meaning the financial burden for teachers remains same,” said an official with the association. “It is impossible to operate local education offices without the government grant, given they don’t have any tax income.”

This is not the first instance of friction between the government and local education offices. Last year, when the government announced it would withdraw funding for the free day care program for children aged 3 to 5, regional governments threatened to discontinue it altogether, citing financial strain.

During the meeting, the president also suggested that the local shared tax system be reformed. The Ministry of Government Administration and Home Affairs said it would come up with a draft by April.

As of Monday, the entire staff in the presidential office for civil affairs - with the exception of the office’s new leader and senior secretary Woo Byung-woo - had tendered their resignations or were preparing to do so.

Woo was promoted on Friday. A ministerial reshuffle is expected this week.