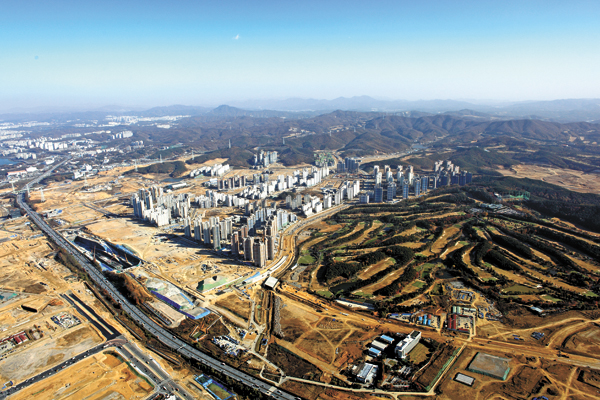 Dongtan New Town in Hwaseong, Gyeonggi, is one of the sites of the government’s public-private housing initiative. Provided by Korea Land and Housing Corporation

The government on Thursday identified 24 areas in Gyeonggi and North Chungcheong where private companies will be allowed to build rental apartments for middle-class people on state-owned land.

According to the Ministry of Land, Infrastructure and Transport, construction of 10,037 units will begin this year on property owned by state-run builder Korea Land and Housing Corporation (LH) in Gyeonggi, including Seongnam, Yongin and Hwaseong, and in Eumseong County, North Chungcheong.

Most of the construction sites will be subject to public offerings in April, June and September. 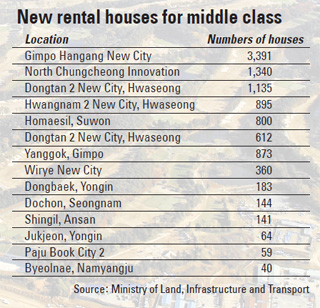 Local investors in real estate investment trusts (REITs) will be assessed based on corporate organization, assets and detailed business plans of how they would manage public rental houses.

Selected investment companies will receive interest-free loans for as long as five years.

The program is aimed at providing affordable rental housing for middle-class people who suffer from a shortage of jeonse (two-year rentals based on lump-sum deposits) units. It also is intended to expand property investment by allowing REIT businesses to put money into public rental apartments.

It is the first time the government has allowed the private sector to participate in public housing. Previously, private construction companies were prohibited from building apartments on public land.

The Land Ministry first brought up the idea of attracting the private sector to the public housing business earlier this month during a briefing at the Blue House.

“In addition to our push from the government side, second-term lawmaker Kim Sung-tae of the ruling Saenuri Party is scheduled to make a motion in the National Assembly tomorrow [Jan. 30] for a special act that allows private-sector participation in public rental housing projects,” said an official at the Land Ministry. “We also will finish revising the existing public rental housing act in February to allow private companies to start jumping into this project before lawmakers pass the bill.”

The New Stay initiative is one of Park Geun-hye government’s flagship policies for 2015. However, analysts say its success will be determined by the level of interest in the project from private-sector builders.

“In order to attract large builders and investors, each area has to have at least 600 units built. If the areas are too small, it is obvious that big companies won’t show interest and the project will end up with only small builders,” said Kim Dong-soo of the promotion department at the Korea Housing Association.

“Certainly, private companies have to jump into the rental housing businesses,” said Kwon Dae-joong, a real estate professor at Myongji University. “However, I think small units have to be built in those 24 areas unveiled today in order to attract the middle class. Large houses don’t fit the needs of prospective residents.”