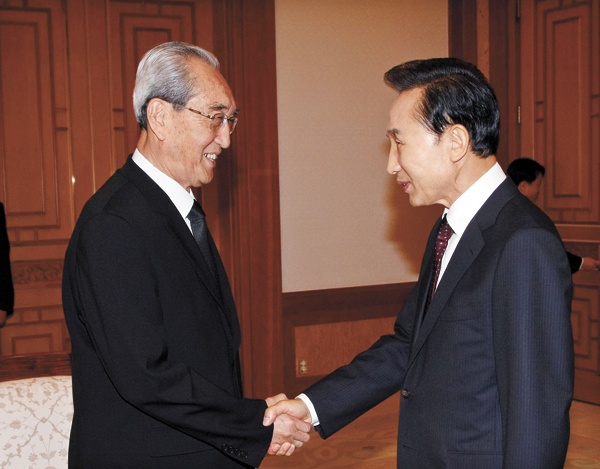 Excerpts from former President Lee Myung-bak’s upcoming memoir detailing sensitive political and diplomatic information, including those involving top Chinese leaders, caused an uproar when they were made public Thursday.

The JoongAng Ilbo obtained the manuscript of “The President’s Time” and ran exclusive reports on it Thursday. The memoir is scheduled to be released Monday.

Lee wrote, “China strongly didn’t want conversations between leaders on North Korea to be made public. If they were leaked, I could have not had candid conversations with the Chinese leadership.” But his exchanges with top world leaders - including Chinese and American - are described in detail.

In the memoir, Lee recalled that then-Chinese Premier Wen Jiabao was skeptical about Kim Jong-un’s ability to hold onto power in North Korea. 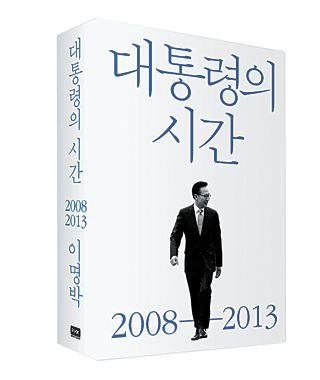 The memoir of President Lee Myung-bak will be released Monday. [JoongAng Photo]

“I don’t know the young leader [Kim Jong-un] of North Korea well, but I believe we have to be patient with the North,” Lee quoted Wen as saying during a dinner meeting in 2012. At the time, the North was preparing its third-generation dynastic succession.

“We are old and will retire soon, but a young man is taking power in the North. I am worried because his reign will go on for another 50 or 60 years,” Lee told Wen, according to the memoir.

“But would that go with the flow of history?” Wen was quoted as replying.

Lee wrote, “I understood his remarks to mean that we won’t have to be patient for too long concerning the North’s future.”

The book also says that U.S. President Barack Obama expressed frustration over the Korea-U.S. free trade negotiations as he faced criticism at home. During a November 2010 summit, Obama complained that Lee probably had less of a problem because Korea has a single, five-year presidency, but the situation was different for him as he faced a re-election battle, according to the book.

The memoir also disclosed sensitive moments between the two Koreas.

During a meeting to discuss an inter-Korean summit with then-Labor Minister Yim Tae-hee in Singapore in 2009, Kim Yang-gon, director of the Unified Front Department of the North’s Workers’ Party, reportedly told him, “If I return without an outcome, it means death,” the book says. Kim is still serving in that post in the Kim Jong-un regime.

While writing his memoir, Lee’s friends and former aides tried to talk him out of describing the measures he took after the North’s shelling of Yeonpyeong Island in November 2010. But Lee decided to include them.

Senior North Korean intelligence and military officials secretly visited the South shortly after the attack and the two Koreas also had contacts using the New York channel, according to the book.

“The public felt very upset that the Lee government failed to proportionally and strongly counter the Yeonpyeong Island shelling,” said a former Lee Blue House official on Thursday. “So he wanted to provide accurate information to the people.”

“In fact, the North was extremely fearful about our retaliation and sent officials from the State Security Department and the military to explain its position to us,” he said. “Our idea was that we must take strong follow-up measures to prevent any additional provocations during the remainder of the presidency.”

Lee Dong-kwan, the former public affairs senior secretary for Lee, said Thursday that Lee did not make public any sensitive information about China and North Korea during his term.

“But we had a discussion [while he was writing the memoir] and agreed to make public information that will be helpful to generations to come,” he said.

But officials in charge of North Korean affairs and foreign policies in general were baffled by Lee’s exposing of diplomatic secrets.

“Many of the people described in the memoir are still working in the government, and even the retired ones are still politically influential,” said a Foreign Ministry official. “The book revealed too many of confidential, private conversations, and they probably feel offended.”

“If leaders think what they say will be revealed only three to four years later, no one will talk to us candidly during a summit,” another official said.

Reactions were split even in the ruling Saenuri Party. While allies of the former president said it would be helpful for the government to maintain consistency in North Korean and other foreign affairs policies, people in the pro-President Park Geun-hye wing of the party deplored Lee’s actions.

“I don’t know how helpful it is to make public very sensitive and complicated affairs, such as inter-Korean relations,” Rep. Kang Seog-hoon said.

Rep. Hong Il-pyo complained that Lee made public episodes that are too recent.

The opposition New Politics Alliance for Democracy (NPAD) attacked Lee for convenient timing, as the former president and his aides are being criticized for their overseas resources diplomacy. A special parliamentary investigation is planned over mismanaged projects.