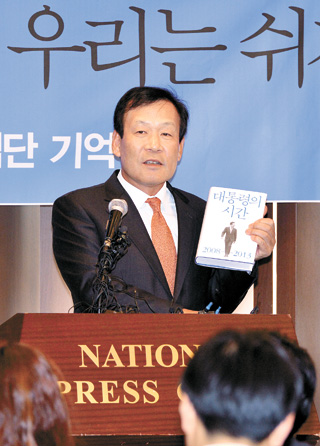 Kim Du-woo, former presidential secretary for public relations at the Blue House, holds a copy of the memoir during a press conference Friday at the Press Center, central Seoul. [NEWSIS]

The Blue House expressed its annoyance with the memoir released by former President Lee Myung-bak Friday, saying it would not help national interest.

A senior Blue House official speaking on the condition of anonymity said Lee’s revelations of behind-the-scenes talks with North Korean officials in particular would not improve current inter-Korean relations.

The official also said that Lee’s claim in the book about President Park Geun-hye’s real motives for opposing Lee’s plan to scrap the relocation of the central government to Sejong City was based on a “misunderstanding.”

The Blue House’s response, although unofficial, was clear annoyance as the release of the former president’s memoir was brought forward to Friday, three days ahead of its original schedule.

The memoir comes out at a time when President Park’s approval ratings have hit 29 percent, the lowest level since she took office two years ago.

Media reports on leaked manuscripts of the book said that Lee thought Park objected to his revisions to the Sejong City plan because she was worried that former Prime Minister Chung Un-chan, who led the campaign on behalf of the Lee government, could emerge as a threat to her presidential ambitions.

In a press briefing held by Kim Du-woo, former presidential secretary for public relations at the Lee Blue House who participated in writing the memoir, the former president tried to exclude experiences that could trigger political controversy. Kim said the current Blue House occupants would understand Lee’s true intentions once they read the entire book.

In the memoir entitled “The President’s Time,” Lee touches on inter-Korean relations with a highly critical view of the engagement policy carried out by the two liberal governments that preceded him. Lee said North Korea misused the good intentions of the Seoul government and pursued nuclear weapons development with the financial assistance and economic cooperation provided under Seoul’s “Sunshine Policy.”

Lee also wrote that instead of inducing the Communist nation to open up to the outside world, the policy caused the impoverished country to become more closed with the South’s cash in its pocket.

“Aid for North Korea was spent on its nuclear missile development and military provocations against the South even during a period of embrace [during my term],” wrote Lee.

Lee also recalled advising former U.S. President George W. Bush against sending rice aid to the North during a meeting at Camp David in 2008, telling him the North could use the rice for its military rather than for its suffering people.

“Rice would end up being consumed by the military. Give them corn or flour, which can’t be kept for a long period of time. Then the North Korean people could have them instead,” Lee told Bush. Lee said Bush took his advice.

The chapter dealing with his encounter with the former U.S. president is titled “The Restoration of Korea-U.S. Relations” and reflects Lee’s view that his predecessor Roh was not on good terms with the longstanding ally.

Lee wrote that the engagement policy eventually marginalized South Korea in multinational talks aimed at denuclearizing the North because its main priority was not making Pyongyang give up its nuclear ambition but on cultural and economic exchanges.

Lee is clearly responding to critics who have held him accountable for freezing Seoul-Pyongyang relations following a decade of rapprochement. During his five-year term, tours to Mount Kumgang were stopped and the South Korean Cheonan navy vessel was torpedoed by the North, leaving 46 men dead. (Pyongyang has consistently denied responsibility.)

Lee writes that Pyongyang said it would send a delegation to his inauguration in 2008 if Lee wrote them a letter thanking them for helping him get elected, a demand Lee rejected outright and called “absurd.”

On growing worries that Lee’s disclosure of chats with foreign leaders, including former Chinese President Hu Jintao and U.S. President Barack Obama, would hurt the Park administration in its handling of foreign affairs, Kim said Lee took into account the potential trouble his revelations could cause and only wrote about issues and incidents that would not affect the current government.

In his memoir, Lee wrote that former Chinese Premier Wen Jiabao expressed doubts over the future of North Korea under inexperienced and young leader Kim Jong-un, saying the flow of history would not allow Kim to have a lasting grip on the country.

Lee’s account comes at a delicate time for the two traditional allies, whose relations have hit rock bottom in recent years after a series of provocations by Pyongyang against Beijing’s wishes. In a testament to the deteriorated relations between the two, Chinese leader Xi Jinping has not visited Pyongyang or invited the 32-year-old Kim to Beijing.

The CEO-turned-president’s disclosure of his time at the Blue House sparked a political uproar days before its scheduled release next Monday after several sections of the manuscript was leaked to some local media.

While Kim Du-woo claims Lee tried not to be political in his book, he clearly blames the Roh Moo-hyun government for leaving him little room for negotiations with its U.S. counterpart over imports of American beef, which became a big headache in the early part of his term.

Lee wrote that Roh had an unofficial agreement with Washington that he would allow imports of American beef regardless of the cows’ ages. U.S. beef imports and the fear of mad cow disease led to massive public protests during Lee’s first year as president, forcing him to issue a public apology.

The publication of his memoir also comes at a delicate time for Lee as the National Assembly is holding a special parliamentary inquiry into his overseas resource development projects, with the opposition defining it as a complete failure that resulted in the loss of 35 trillion won ($31.8 billion) in public money.

Early critics say the memoir shows no humility or regrets and avoids big controversies like the government’s prosecution of his predecessor Roh, who committed suicide.

Kim said Lee’s book will be published in Taiwan and China in March and will be translated into English.