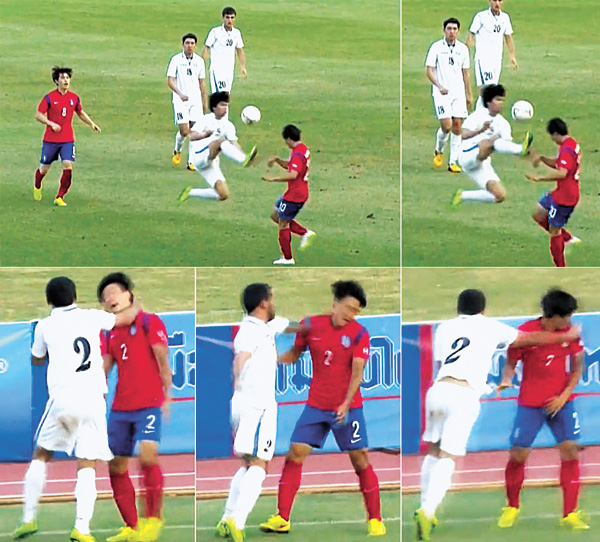 Tohir Shamsitdinov punches defender Sim Sang-min in the face during a 2015 King’s Cup match on Sunday in Thailand. [NEWSIS]

The Korea Football Association announced on Tuesday that the Uzbekistan Football Federation (UFF) has officially apologized for its players’ actions during a friendly match on Sunday in which two members of the Uzbek Olympics team assaulted Korean Olympic team players.

The UFF issued its apology on Monday for its members’ violent behavior.

“The Uzbekistan Football Federation would like to express sincere apologies for the incidents that occurred during the match and declares that Tohir Shamsitdinov and Jaloliddin Masharipov, who were involved in said incidents, will undergo strict disciplinary actions both by the Uzbekistan Football Federation and their football clubs,” the statement said. The UFF also posted the apology on its official website.

The Uzbekistan U22 team came under fire after it lost 1-0 to the Korean team on Sunday in a friendly match during the 2015 King’s Cup in Nakhon Ratchasima, Thailand. While Uzbekistan was trailing 1-0 in the second half, Masharipov was fighting for a bouncing ball and ended up kicking midfielder Kang Sang-woo in the chest with his right foot in the 77th minute. He was sent off immediately with a red card.

Then in the 87th, Shamsitdinov flew into a rage and punched defender Sim Sang-min in the face three times after the two were competing for the ball. He was also shown a red card.

The violent behavior of the Uzbek footballers drew criticism from around the globe. The British tabloid newspaper Daily Mirror ran the headline “Uzbekistan under-22s prove themselves to be football’s most violent team.”

“Is it possible to be so angry that you try to punch an opponent too hard? That certainly appears to be the case with the chap who tries to chin his South Korean opponent. Just as well he didn’t connect properly, or he might actually be facing a murder charge,” the story read.

The KFA sent a letter of complaint to the organizers of the tournament on Sunday. The organization has banned Shamsitdinov from two matches.

The KFA added that the entire coaching staff and Shamsitdinov visited the Korean team’s lodging on Monday to apologize. The UFF immediately sent the player home.

The Korean Olympics team said it is practicing as normal.

“Sim could have fought back, but he didn’t because he is an upright and patient person,” KFA official Park Eun-ji said Tuesday.