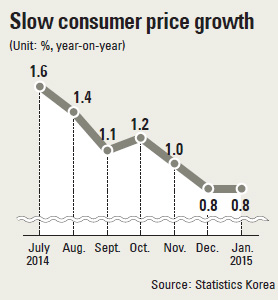 Despite a hike in cigarette prices, consumer prices inched up 0.8 percent in January compared to a year earlier, posting growth of less than 1 percent for the second consecutive month.

This has led to increased concerns that the economy is entering a period of deflation, which the government has consistently denied.

According to Statistics Korea on Tuesday, the country’s consumer price index edged up 0.8 percent in January compared to the same month in 2014. The index rose 0.5 percent over December.

The year-on-year growth figure was the same as in December. It is the lowest inflation rate recorded since October 2013, when consumer prices increased by 0.9 percent year-on-year. Inflation figures also contracted from September through November.

The statistics agency said in a report that the 2,000 won ($1.8) cigarette tax hike resulted in a 0.58 percentage point increase in consumer prices, but that was offset by declining oil prices.

The core inflation index, which excludes volatile agricultural and petrochemical prices, rose 2.4 percent year-on-year in January, an increase of 0.9 percent over the previous month. It was the first time the index has increased since September.

According to the data, cigarette and liquor prices rose about 50 percent year-on-year in January due to the 2,000 won tax per pack of cigarettes that took effect at the start of the year.

Kim said that the low growth in prices in January was not a sign of deflation.

The Ministry of Strategy and Finance said in a report that the 0.5 percent month-on-month consumer price increase is considered normal compared with the average monthly growth of 0.6 percent from 2005 to 2014.

“Though energy prices kept the overall inflation index low, the core inflation index has been rising, showing that there is more demand,” said Son Woong-ki, a director in charge of consumer prices at the ministry.

The government expects the pace of economic recovery to improve this year and that more demand will boost consumer prices in the coming months. It forecast the economy would growth 3.8 percent this year, up from 3.3 percent last year. Its consumer price growth projection is 2 percent.