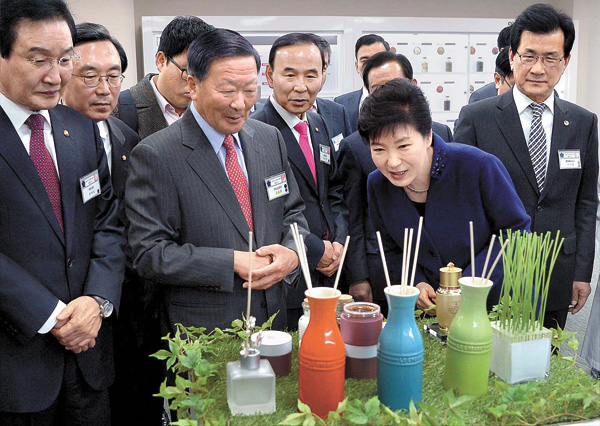 LG Group said it will invest 1.6 trillion won ($1.48 billion) in the center over the next three years. The center will be used for R&D projects by LG’s bio, beauty and clean energy affiliates, which will work to help small companies based in the province commercialize their products.

The investment, which is the most a chaebol has put into a creative economy center, will mostly go toward helping small cosmetics and biotech companies develop high-quality products and expand their business.

LG was selected to open the center in Cheongju because some of its LG affiliates, including LG Chem’s display and battery businesses and LG Life Sciences’ pharmaceutical business are based there.

Cheongju has in recent years emerged as a hub for beauty and biotech research. About 27 percent of Korean beauty products are produced there, and more than 60 biotech companies and state-run biotech research institutes are located there.

The Park Geun-hye government hopes the creative economy innovation center project will produce tangible positive results for her long-touted concept of “creative economy.” Park has said that ICT should be integrated with traditional manufacturing to create more tech start-ups that will help boost the economy.

The concept has been criticized because it has not led to any economic improvements, though the government has invested heavily in the campaign.

To come up with visible results, Park’s administration last year urged chaebol to open research and start-up support centers, where the conglomerates help small companies expand their networks and also use them as a supplier.

“The North Chungcheong Creative Economy Innovation Center will play a pivotal role in connecting three factors - basic research infrastructure in the region, LG’s R&D capability and money and bright ideas generated from small companies and start-ups based here in Cheongju,” said Park. “By integrating all these factors, the center will be able to create a strong business ecosystem for biotech, beauty and clean energy industries.”

Park added that she hopes the Cheongju center will be able to expand its work with female entrepreneurs and mothers who want to return to the work force in the cosmetics industry.

LG affiliates also will share about 27,000 of its patents with small companies and start-ups and provide consultation on how to use them.