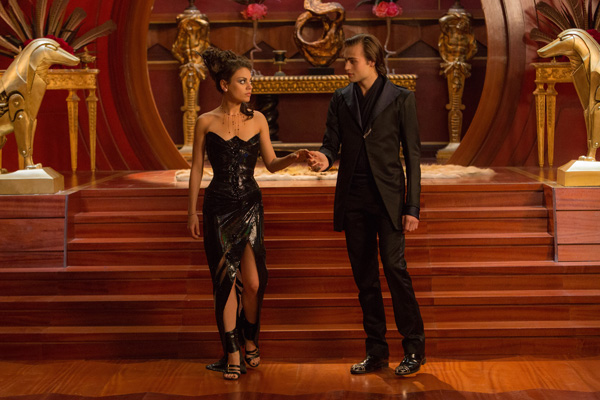 LOS ANGELES - It seems as though nothing can come between the Wachowskis.

When the filmmaker siblings are asked what incites the biggest spats between the duo best known for writing and directing “The Matrix’’ trilogy, Andy and Lana Wachowski provide a non-verbal response: The brother and sister sweetly clasp each other’s hands and tap their contrasting noggins - Lana’s fuchsia-hued dreadlocks, Andy’s wrapped-up bald head - together.

The Wachowskis are equally unflappable when it comes to criticisms of their recent work. They’re undaunted by the weak box office for their 2012 time-jumping drama “Cloud Atlas’’ and their hyper 2008 cartoon adaptation “Speed Racer,’’ and they’re impervious to the torrent of pessimism swirling around their forthcoming space opera “Jupiter Ascending,’’ out Friday.

“I’ve gotten a thicker skin when it comes to Internet searches on our art,’’ said Andy matter-of-factly during a recent interview.

“Jupiter Ascending’’ centers on a toilet-scrubbing earthling (played by Mila Kunis) and her gravity-defying alien bodyguard (Channing Tatum). The pair becomes caught up in an epic case of intergalactic sibling rivalry, with Eddie Redmayne, Tuppence Middleton and Douglas Boothand portraying a royal space dynasty with nasty plans for humanity.

“I like things that are different,’’ said Kunis, who plays titular character, Jupiter Jones. “You have to do things because you want to do them, not because someone else wants you to. If it fails, it doesn’t matter. I did it because I wanted to work with the Wachowskis. If it doesn’t do well, at the end of the day, I still got to work with great people, and I learned a lot.’’

The result is a mostly straightforward sci-fi romp - for the Wachowskis, anyway - that recalls space sagas like “Star Wars’’ and “Dune,’’ as well as last year’s “Guardians of the Galaxy.’’ It also marks the first original, non-adapted film that the 49-year-old sister and 47-year-old brother have written and directed since they said goodbye to “The Matrix’’ trilogy in 2003.

“There’s directors like John Ford and Christopher Nolan who find a tone and stick with it throughout their careers,’’ said Lana. “We’re not like that. We’re always looking for the range of what we see in life. That creates a tension between us and our audience because they don’t know what to expect. It makes people excited, but it can also make for frustrated consumers.’’

The delay of “Jupiter Ascending’’ from a July to February release, as well as a surprise screening at Sundance where some audience members reportedly walked out, has raised questions whether the film will become a $175 million black hole for distributor Warner Bros. Lana likened the reshuffling of “Jupiter Ascending’’ to the studio’s shifting of “Gravity’’ in 2013.

For the Wachowskis, “Jupiter Ascending’’ isn’t just another sci-fi flick. It’s also an opportunity to stand up for fresh material at a time when studios are keener to greenlight sequels, reboots and adaptations. (Andy called the possibility of returning to “The Matrix’’ a “particularly repelling idea in these times.’’) It’s yet another subject where the duo is united. AP