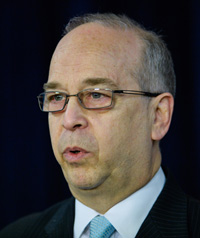 The top American envoy for East Asia recommended that Pyongyang learn from the recent history of Myanmar, emphasizing that “change in North Korea” does not necessarily equate to a regime change.

Daniel Russel, assistant secretary of state for East Asian and Pacific Affairs, said at the Foreign Press Center in Washington on Wednesday, “We are always alert to and seeking indicators of seriousness of purpose on North Korea’s part that it is prepared to negotiate.”

He underscored that Myanmar is an example of a country where “opportunities that have opened and the scope of international cooperation has not come at the cost of a revolution,” leading to the transformation of the Southeast Asian country’s economy and the lives of the Burmese people.

Russel said Myanmar’s military-backed government made the decision to allow democratic reforms. “A change in North Korea does not [have] to be a regime change as the example of Burma shows.”

U.S. and Myanmar relations improved especially through a landmark visit by President Obama to the country in November 2012. The United States lifted key economic sanctions on Myanmar earlier that year. He visited again in 2014.

Last month, Obama made controversial remarks on a Jan. 22 YouTube interview in regards to North Korea, predicting that “over time you will see a regime like this collapse.”

North Korea’s National Defense Commission on Wednesday threatened a nuclear strike against the United States, accusing the Obama administration of trying to induce the North’s collapse. The usual bellicose rhetoric from Pyongyang returned after reports earlier this week that the two countries tried to arrange a meeting but failed. North Korea last month offered to temporarily stop its nuclear tests if Washington and Seoul halted their joint annual military drills.

Russel added, “The fact of the matter is that we don’t have a hostile policy, we have a denuclearization policy,” stressing again that Pyongyang needs to demonstrate its denuclearization commitments.

He further requested that North Korea adhere to an accord from Sept. 19, 2005, in which it agreed to scrap all existing nuclear weapons and nuclear production facilities and allow International Atomic Energy Agency inspectors into the country.

“Although untested at longer ranges,” he said, it could “pose a direct threat to the United States.”

Obama’s pick to head the Pentagon vowed to “draw upon the full range of our capabilities to protect against, and to respond to, these threats.”

He also said warned that the United States “should remain vigilant against the strong possibility that North Korea will use brinkmanship and provocations” to try to get back to negotiations on its own terms.

Next Monday, new U.S. Deputy Secretary of State Antony Blinken will visit South Korea in his first overseas trip since he took the post in December. Over two days, Blinken is expected to discuss close coordination with Seoul on North Korea issues. The Asia visit will also take him to Tokyo and Beijing.