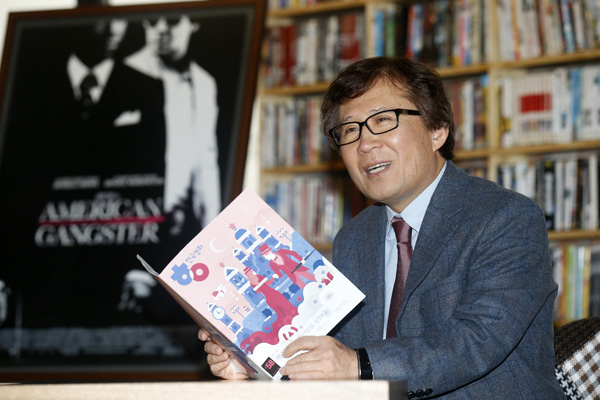 About 20,000 film-related items collected by Prof. Min Byeong-rok are displayed at his movie library in Jeonju, North Jeolla. Min has treasured the items since his youth. Provided by Jeonju City

A new movie library in Jeonju, North Jeolla, houses a rich collection of old films such as “The Arrival of a Train” (1896), considered one of the first-ever moving pictures, and countless other treasures owned by Prof. Min Byeong-rok.

The Dongguk University theater division lecturer will return to Jeonju, his hometown, permanently when he retires this month after 30 years of teaching in Seoul.

The professor opened the library on Jan. 24.

“I thought it would be such a waste to keep all these valuable things simply for myself,” Min said. “So I decided to share those film treasures with others from the movie industry and the people of Jeonju.”

The old movies are organized chronologically so that film fans can learn about the history of movies at a glance.

A quick peek at the shelves will lead visitors on a journey from the neorealism of the early 1950s to the Nouvelle Vague of the early 1960s and on to new cinema in the 1960s to 1970s.

Min began to doggedly collect film memorabilia during Korea’s military regime in the 1960s to 1970s, during which the government only allowed 30 foreign movies into the country.

“At that time, I was a student majoring in film studies, and I felt sad that I couldn’t relish films as much as I wanted,” Min said.

As well as movies, Min also donated 100 film-related artifacts to the museum: Magic lanterns, early types of movie projectors before film was produced; small cameras used at shooting locations in the 1930s to the 1970s; and hand-made figures that take after film characters or movie stars such as Shrek, Marlon Brando and Harrison Ford.

When Min studied abroad in Japan, he saved up money while working part-time as a camera assistant. When the cash came in, Min used to sprint to Akihabara, an electronic stores district in Tokyo. While in the United States Min bought clothes such as jeans and shirts from importers then sold those to street vendors at flea markets or baseball stadiums in order to purchase more films.

He recalled a nerve-wracking time when he tried to smuggle more laser discs into the country than customs allowed at the time and had to ask other passengers to carry some in for him.

“Many good movies derive from old ones,” Min said. “The movie ‘Star Wars’ is one. Many of highlights in the movie are extracted from past movies such as ‘Tarzan the Ape Man’ [1932], ‘Stagecoach’ [1939] and ‘Seven Samurai’ [1954], with the background moved to the future.

“In that context,” Min continued, “I hope the movie library where my film treasures are shown become an inspiration for future movie directors.”