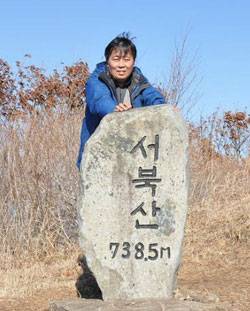 Park Won-yeon, who considers himself an expert on historical sites, travels across the country to discover memorial monuments that are little known. Provided by Park Won-yeon

In 1969, a military car overturned on a winding bridge on a national highway in Cheorwon District, Gangwon.

Hwang Seong-yeon, an Army sergeant, was returning to his unit after military practice when he was killed in the accident. To the man’s grieving father, the solution was clear.

He decided to deconstruct the bridge, notorious for accidents, and transform it into a straight passageway. In fact, it was Hwang’s father who pulled the money for the project from his own pocket.

Since then, there have been no more fatal accidents on this “road of death,” which Hwang’s father eventually renamed Seongyeon Gyo (Bridge) in memory of his son.

In return, the military unit where Hwang was assigned dedicated a memorial stone that bears the engraving: “This bridge is dedicated to Sgt. Hwang and the nation.”

For Park Won-yeon, an avid traveler who considers himself an expert on historical sites, Seongyeon Gyo is the saddest but also the most beautiful memorial landmark in the country.

And even now, the town’s residents offer commemorative rites in front of it.

“That small memorial stone plays a role in uniting the people in town, those in the military and Sgt. Hwang’s parents,” he said.

Park is employed at a software corporation, but since 2010 has traveled to seek out little known historical sites in honor of the 1950-53 Korean War, the nation’s patriots, military heroes and police officers.

Using his technological expertise, he also set up a database of all the information he’s collected, uploading it online.

This personal project began, he said, once his younger son entered the military.

When Park visited the military base with him, he was given a chance to learn about the seven major marine battlefields in Korea, which piqued his curiosity and left him wanting to learn more about the historical sites related to the Korean Army and the Korean Air Force, the country’s other military branches.

But he neither had a list of these memorials nor their exact locations.

“Unlike national memorials, local governments don’t manage historical sites,” Park said. “It’s such an unfortunate situation. So I set a goal that I would provide accurate information in terms of where those monuments are located.”

Over the past five years, Park has collected and organized information for 4,938 sites nationwide and preserved nearly 50,000 photographs.

Together, his trove of information spans all of Korea’s modern history, from the Japanese colonial era to the country’s independence and the 1950-53 Korean War.

“Out of 4,953, I now have 15 memorial monuments that I am still targeting,” Park said. “My goal is to provide a wealth of information arranged by theme or time period to local governments so that they can manage those historical sites better.”

He plans to expand his project internationally and include historical Korean sites in other countries, he added, “although, I may be a little exhausted after achieving my first goal.”