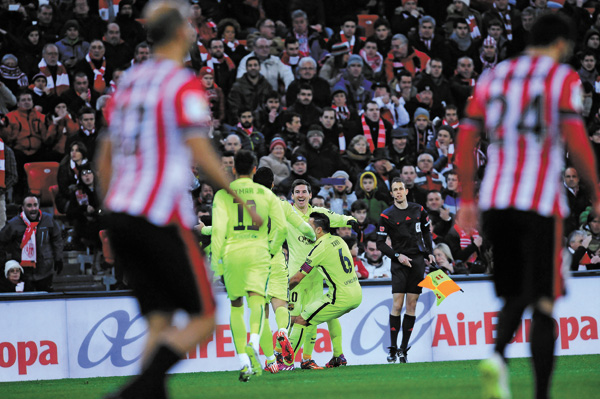 Lionel Messi scored one goal and played a part in four more as Barcelona won 5-2 at Athletic Bilbao on Sunday and reduced Real Madrid’s lead of the Spanish league to one point.

Messi scored from a free kick in the 15th minute at New San Mames Stadium for his 33rd goal in 31 matches this season.

The Argentina forward then turned playmaker and Luis Suarez blasted his assist into the net as Barcelona led 2-0 by halftime.

Messi continued to mesmerize in the second half when he forced Bilbao’s Oscar de Marcos to turn his shot into his own net, set up Neymar’s strike and started a move for substitute Pedro Rodriguez to score, as Barcelona earned its ninth straight win.

“It’s a huge privilege to have Messi and I have to congratulate the entire team,’’ said Barcelona Coach Luis Enrique. “We are closer than before, but we can’t boast about it. Every team has its ups and downs. The key will be to keep improving over the rest of the season.’’

Elsewhere, Valencia defender Jose Gaya set up one goal and saved a second to help secure a 2-1 win at Espanyol that lifted his team into fourth place.

Valencia rose past Sevilla following its 2-1 loss at Getafe to take control of the last Champions League spot.

Bilbao pressed from the start but Barcelona picked the hosts apart with its fine-tuned passing game to keep possession and hit repeatedly on the break.

Messi put Barcelona in front with a free kick that grazed Aymeric Laporte in Bilbao’s defensive wall just enough to catch goalkeeper Gorka Iraizoz off balance. Iraizoz got a hand on the ball but not enough to keep it out of his net.

The action swayed back and forth as Bilbao striker Aritz Aduriz had his first scoring chance in the 19th but was denied by goalie Claudio Bravo.

Messi crossed for what looked to be a guaranteed goal for Suarez in the 20th, only for Iraizoz to fly in and stop his header from crossing the line.

Suarez was left shaking his head, but his frustration ended when Messi drew in the defense on a counterattack and passed back for Suarez to drive a powerful strike though Iraizoz’s diving grasp. It was Suarez’s third goal in 13 league games for Barcelona.

“When Gorka saved my header I told myself ‘That was a spectacular save.’ I didn’t get nervous. What worries me is when I feel I can’t help the team,’’ Suarez said. “I’m very demanding of myself, but I knew the goal would arrive.’’

Messi again played Xavi Hernandez clear to pass for Neymar to knock the ball off the upright, while Aduriz almost took advantage of confusion in Barcelona’s defense when he headed the ball off the post in the 32nd.

In the 59th, Bilbao’s Mikel Rico sparked a four-goal scoring burst in an eight-minute span.

Rico’s goal from a rebound was followed by De Marcos turning Messi’s shot into his net. Messi next spotted Neymar on the left side, with Xavi smartly letting the ball roll through for the Brazil striker to slot home. Aduriz then fired in an angled strike to make it 4-2 in the 66th.

Bilbao would get no closer after defender Xabier Etxeita saw a direct red for kicking Suarez in his right knee with 15 minutes to play.