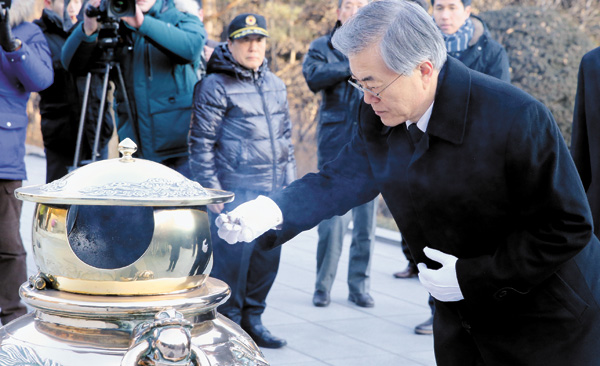 Moon Jae-in, the new chairman of the New Politics Alliance for Democracy (NPAD) and former presidential candidate, burns incense Monday at the grave of former President Park Chung Hee, the father of incumbent President Park Geun-hye, in the Seoul National Cemetery in Dongjak-dong, southern Seoul. It was the first time an opposition leader paid respects to former Presidents Syngman Rhee and Park, whom the country’s liberals have labeled as dictators. [Joint Press Corps]

It didn’t take long for the newly elected opposition leader to launch a full-on offensive at the Park Geun-hye government.

Just a day after his election as chairman of the New Politics Alliance for Democracy (NPAD), Rep. Moon Jae-in slammed the Park government’s economic policy, mainly its promise to keep existing welfare programs without a tax increase.

He also criticized the administration’s seemingly abandoned economic democratization promise, arguing that all of the administration’s promises in regard to an economic revival have turned out to be nothing but “lies.” Moon’s sharply worded remarks have since fueled speculation that he will take a tough stance against a number of issues, ranging from the government’s longstanding refusal to raise taxes at any cost as well as its unwillingness to discuss an amendment to the Constitution.

“I will recover the corporate tax rate to its normal rate and repeal tax breaks on the wealthy. I will create a tax code that is fair and just,” he said during the main opposition’s supreme council meeting, over which he presided for the first time Monday morning.

Pledging to resist any attempts to cut down welfare coverage, the former presidential candidate promised to expand the country’s social safety net to the average among countries in the Organization for Economic Cooperation and Development (OECD).

Part of Moon’s agenda includes normalizing the corporate tax rate to 25 percent from the current rate of 22 percent on taxable income exceeding 20 billion won ($18 million) - a move he believes would make the country’s tax system fairer. The corporate tax rate was last slashed by the Lee Myung-bak administration.

Moon’s demand to raise corporate taxes as part of a tax increase is in line with calls from the opposition that the Park government scrap its insistence on “welfare without a tax increase.” That demand was also echoed by the ruling Saenuri Party after its floor leader, Yoo Seong-min, who was also elected last week, said that lawmakers shouldn’t rule out raising the corporate tax to its previous rate to bolster state coffers.

Shortly after Moon’s offensive, President Park Geun-hye directly rebuffed her one-time presidential rival, going so far as to define his demand as a “betrayal against the people.”

During her meeting with Blue House senior secretaries on Monday, Park stressed it was of utmost importance to find ways to enforce the welfare system without burdening the public with increased taxes, reiterating her long-held position that revitalizing the economy would naturally lead to an increase in tax revenue.

“Is it right to ask the people to pay more in taxes without doing our best to revitalize the economy just because tax revenue falls short of expectations? That is the question I always have in the back of my mind,” she said.

Since her presidential campaign, Park has argued that cracking down on the underground economy and forging an environment that fosters investment would result in increased tax revenue without subjecting corporations and the wealthy to an additional tax burden.

The barb-throwing between Moon and Park is in some ways reminiscent of their heated contest in the 2012 presidential race, in which the NPAD’s new leader was bitterly defeated by a margin of 3.6 percent.

Their confrontation Monday hints at a tough road ahead for the Park Blue House, which must now deal with the main opposition party under Moon’s leadership. In recent months, NPAD has been emboldened by an increase in its popularity in tandem with the decline of the Park government’s approval ratings.

Affected by controversial year-end tax settlements and other mishaps in tax policy, its approval ratings plummeted below the 30 percent mark in a recent poll - a huge blow for the Park administration, which has only just entered its third year.

It could also face additional challenges if its prime minister nominee, Lee Wan-koo, fails to pass his National Assembly confirmation hearing in the midst of growing allegations over ethical lapses. It was initially expected that the former Saenuri floor leader would easily pass the hearing.

A raft of allegations over real estate speculation and his attempts to meddle in press coverage by intimidating senior journalists took even his fellow ruling party lawmakers by surprise and raised the possibility that he could be forced to bow down.

If Lee foregoes his nomination, he would be the third consecutive prime minister nominee to fall victim to allegations over personal ethical breaches.

Moon signaled Monday that his party would intensely question Lee at the confirmation hearing, which kicks off Tuesday, adding that the main opposition would decide what action to take afterward.

“The public is skeptical over whether Lee is fit to serve as prime minister amid all these allegations over real estate speculation, military dodging [by his son] and attempts to control media coverage,” Moon said following a visit to the burial site of Kim Gu, a revered Korean independence fighter during Japan’s colonial rule of the peninsula.

Moon made his first official public appearance as the NPAD’s new leader early in the day, visiting the graves of former Presidents Syngman Rhee and Park Chung Hee, the father of incumbent President Park Geun-hye.

His visit bears significance in that it was the first time an opposition leader paid respects to the two former statesmen, whom the country’s liberals have labeled dictators. Moon’s trip was interpreted as his effort to bridge deeply rooted ideological divisions between liberals and conservatives to achieve national unity.

Park Chung Hee, while hailed by his supporters for his strong leadership and guiding the country’s rise from the ashes of war into an economic powerhouse, is also criticized for ruling Korea with an iron fist over 16 years until his assassination in 1979.

“All histories represent the Republic of Korea. I dream of sincere reconciliation and unity,” Moon wrote in the guest book.

In university, Moon participated in student-led protests against the Park Chung Hee regime before passing the bar exam. He then worked as a human rights lawyer alongside former President Roh Moo-hyun in the 1980s.

He served as presidential chief of staff two decades later under the Roh administration.