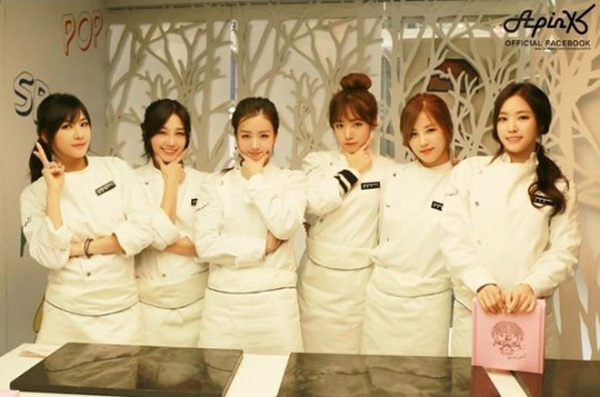 Photos of girl group Apink making chocolates for fans were uploaded onto the group’s Facebook page on Tuesday.

In the series of pictures, the six members are clad in white chef uniforms and are learning how to melt and shape chocolates from a professional chocolatier.

In the same post, Apink’s agency A-Cube Entertainment said fans can get their hands on the homemade treats by liking the post describing the contest and writing why they want to win the chocolates on their own page, including the hashtag #Apink.

The winners will be unveiled on Thursday on Apink’s Facebook page.

Unlike other girl groups that specialize in provocative outfits and steamy dances, Apink, formed in 2011, sticks to its girl-next-door image.

Apink is loved by their fans as a group, but individual members also have busy careers.

Yoon Bo-mi is starring in a spinoff version of the popular reality TV show “Real Men,” in which female celebrities experience what life would be like if they joined the military, while Kim Nam-joo was recently accepted into college.

The girl group will fly to Japan on Saturday and will stay there for about 10 days to meet their Japanese fans and promote their digital single “Mr. Chu.”