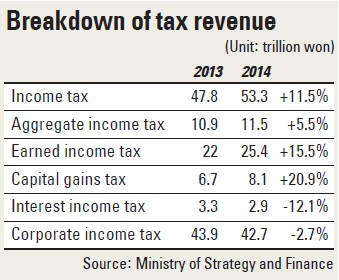 Tax revenue in 2014 was nearly 11 trillion won ($10 billion) short of the government’s budget target, the biggest shortfall since 1998, the Ministry of Strategy and Finance reported Tuesday.

It was the third consecutive year the government failed to reach its revenue goal, and it comes at a time of intensifying debate over whether taxes should be raised to fund ever-growing welfare spending.

“The shortfall is the result of low growth that affected corporate earnings,” said Noh Hyeong-ouk, deputy minister for fiscal affairs. “Sluggish domestic demand and the Korean currency’s appreciation also caused the collection of value-added taxes and import duties to fall.”

Experts blame economic forecasts that were too rosy. The government’s targets for GDP growth and inflation were unrealistic, said Kim Sung-tae, a researcher at the Korea Development Institute.

If the revenue forecast is wrong, the government sometimes ends up with no spare money, said Lee Jun-hyup, director of macroeconomic trends at the Hyundai Research Institute.

A more serious problem is that a revenue shortfall is likely to happen again this year. The government in August forecast current account growth of 6.1 percent, which is the sum of GDP growth and inflation rates, for 2015. But in December, it lowered the GDP growth forecast to 3.8 percent and the inflation rate to 2 percent.