TVXQ’s ‘With’ gets a release in Korea

TVXQ’s ‘With’ gets a release in Korea 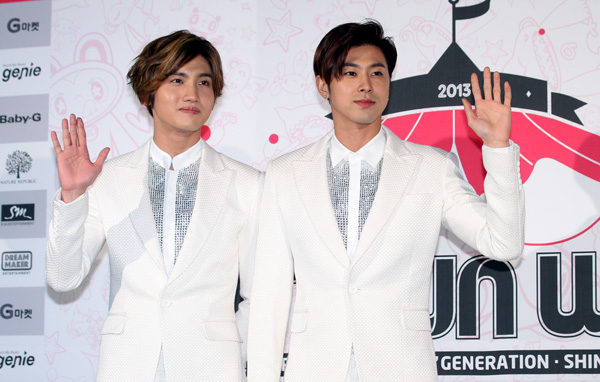 K-pop boy group TVXQ’s album “With,” which was released in Japan, hit the shelves in Korea on Wednesday, according to SM Entertainment.

SM said TVXQ has released five albums in Japan so far, including “With,” and each of them ranked at the top on the Oricon weekly albums chart, a feat never achieved by any non-Japanese musician before.

“With” comes in three options in Korea. The first is a single CD and the second is a single CD with the addition of a DVD that includes six music videos and live performances by the K-pop duo.

The other is a basic CD and a DVD that has behind-the-scenes footage of TVXQ posing for photo shoots and a documentary of the duo from last year’s live tour.

TVXQ began its career in 2004 with five members, but three of them, Kim Jae-joong, Park Yoo-chun and Kim Jun-su, filed a lawsuit against SM in 2009 to nullify their contracts.

The three eventually left the group and formed JYJ in 2010.