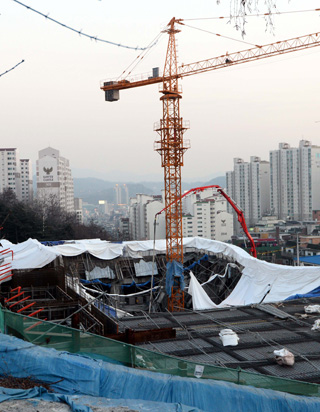 The roof of the Sadang Gymnasium, under construction in Dongjak District, southern Seoul, collapsed on Wednesday while concrete to make the roof panel was forming. More than 200 firefighters and police were immediately dispatched to the scene. Eleven construction workers were rescued from under the debris. Three of them were reported to be seriously injured, while the others sustained minor injuries. While looking for more people at the scene, authorities provisionally concluded that there were no more people trapped. Others witnessed a member of the construction team leaving the construction site before the accident. The whereabouts of the remaining member could not be confirmed as of press time Wednesday, however. After the accident, Seoul Mayor Park Won-soon and Dongjak District Office Lee Chang-woo visited the scene and surveyed the rescue work. The construction of the two-story gymnasium began in June 2013 and was scheduled to be completed later this year. [NEWSIS]