Abe sends another letter to Park

Abe sends another letter to Park 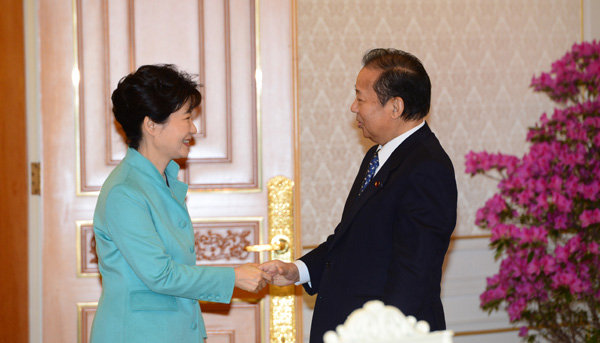 The letter acknowledged that Korea and Japan will mark the 50th anniversary of diplomatic relations this year and that the two sides should work together to improve the ties, according to the Blue House.

Earlier in the day, Tokyo confirmed Nikai was carrying a letter to Park. “It is true that Prime Minister Abe asked him to carry his letter, but I will not elaborate on the specifics,” said Chief Cabinet Secretary Yoshihide Suga. “We hope this courtesy visit [by Nikai] will lead to an advancement of the two countries’ relations.”

Japanese media, including Japan’s leading news agency Kyodo News, reported that Nikai was playing the role of messenger. The lawmaker met with Abe at the prime minister’s residence on Tuesday ahead of his trip to Korea.

He came to Korea on Thursday as the chairman of the All Nippon Travel Agents Association. About 1,400 officials from the Japanese tourism industry joined the trip, organized to commemorate the 50th anniversary diplomatic ties between Korea and Japan.

Abe had already expressed his hope to have a summit with Park, sending her a letter through a top Japanese politician last year.

In October, Abe once again expressed his hopes for a summit, sending Shotaro Yachi, national security adviser to the prime minister and the inaugural head of the National Security Council, to the Blue House.

All previous requests for a Korea-Japan summit, however, were turned down, as Seoul has maintained that Tokyo must first apologize and compensate the Korean women its military forced into sexual servitude during World War II.

During the Asean+3 summit in November last year, Park counter-proposed a trilateral summit with Korea, China and Japan.

The top Japanese politician’s meeting with Park came shortly after Abe gave an emotional speech to promote his plan to rewrite Japan’s pacifist Constitution, a change which Korea has strongly opposed.

“Isn’t it time to hold deep debate about revising the Constitution? For the future of Japan, shouldn’t we accomplish in this Parliament the biggest reform since the end of the war?” Abe said in his key policy speech at the Diet on Thursday.

Abe has strongly urged the Japanese public to support his reform plans, including a proposed amendment to rewrite the Constitution, which restricts Japan from having its own armed forces. However, he did not elaborate further on the specifics of the amendment or give a timeline. The restriction was placed by postwar American occupiers to prevent Japan from engaging in another military expansion.

Article 9 of the postwar Japanese Constitution reads: “The Japanese people forever renounce war as a sovereign right of the nation and the threat or use of force as a means of settling international disputes,” and for this purpose “land, sea and air forces, as well as other war potential, will never be maintained.”

Abe again urged Park to accept his proposal to hold a summit by stressing that the door for dialogue is always open.