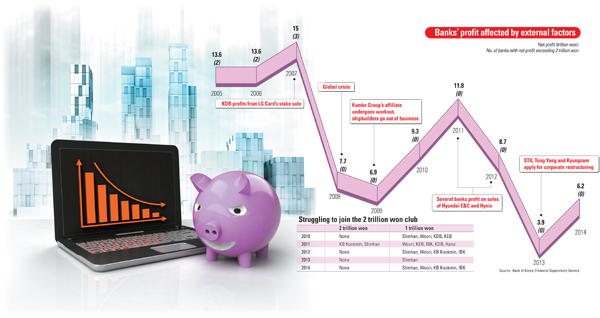 When KB Kookmin Bank announced its performance for the previous year on Feb. 8, 2006, it turned out the bank’s net profit had increased fivefold in 2005 compared to 2004.

But nine years later, that kind of success seems to be a thing of the past. Hyundai Motor has grown into a major conglomerate that generates 2 trillion won every three months. Local banks, on the other hand, continue to struggle.

Since Feb. 4, banks in Korea have been announcing last year’s performances, and for the third consecutive year, none has been able to achieve 2 trillion won or more in net profit.

Shinhan Bank’s situation improved from 2013, but the market’s response has been lukewarm. Share values of the major banks have dropped since their net profits for 2014 were announced.

“Worsening profitability, shrinking profit from interest on deposits and loans due to the loose monetary policy and increasing competition surrounding fintech [financial technology] are all considered negative factors working against the banking industry,” said Lee Chul-ho, a researcher at Korean Investment & Securities. “Even before the banks announced their earnings reports for last year, there were no expectations that the banking industry would return to the time when it made 2 trillion won in net profit.”

Experts say one of the areas in which banks need to improve is their profit models. From the mid-2000s to as recently as 2012, many major banks were pocketing large profits from the debt workouts of companies whose debt they held.

These played a significant part in performance reports released by banks. Instead of figuring out new cash cows and seeking different profit structures, the banks concentrated on turning a profit from the debt workouts of troubled companies.

One of these was LG Card. In 2007, banks garnered huge profits when they sold the company’s shares.

In 2003, LG Card faced one of its biggest challenges when excessive marketing placed the credit card issuer in danger of bankruptcy as many of subscribers were not able to pay back the amounts they had borrowed on their credit cards.

As a result, LG Card sold its shares to its main creditor, Korea Development Bank, and after corporate restructuring the stocks were sold to Shinhan Financial Group in 2007.

But this profit model does not always bring a huge amount of income. In some cases, it can even become a major burden on creditors.

In 2009, Kumho Group’s debt workout program, as well as the bankruptcies of many small and midsize shipbuilders and the global financial crisis, affected bank profits.

And while Hyundai E&C and Hynix’s sales did generate profits for banks, they were brief. By 2013, the banks were once again faced with major losses when many of the companies they were acting as creditors for, including STX Group, Tong Yang Group and Kyungnam Group, faced credit crises.

During this period, household loans, which were considered steady cash cows for the banks, started to worsen. As the central bank began to drop its key interest rate to an all-time low, the profits that the banks collected from interest on loans and deposits shrank significantly.

The aim was to spur expenditures, which worked as households start to take out large loans. The expanding loans, however, failed to generate profits as interest rates had fallen.

In fact, the net interest margin (NIM), a key indicator of a bank’s profitability, reached a record low as the difference in interest rates for loans and deposits narrowed from 2.94 percent in 2010 to 2.18 percent last year.

Last year, the NIM was 1.79 percent - an all-time low and even less than the 1.98 percent in 2009 when the country was suffering during the global crisis.

The net profits of all Korean banks last year amounted to 6.2 trillion won, according to an FSS report, which was a surge of 60.4 percent compared to 2013. But the report noted that the significant increase in profits was largely because 2013’s performance was so dire due to losses caused by the bankruptcy of Tongyang Group and STX Group.

“It looks as though the banks’ profits improved last year because in 2013 they saw their profits sliced by more than half because of the bankruptcy of Tongyang and STX,” said Choi Seong-il, the director of banking in the FSS.

“As the low interest rate situation is expected to continue and debts taken out by companies and households expand to a dangerous level, the banks need to make a fundamental change in their management model to break away from the current structure where they are heavily dependent on the profits earned from the loan-deposit interest model,” said Lee Soo-jin, a researcher at Korea Institute of Finance.

In Japan alone, banks concentrated too much of their business on the differences between deposits and loans that were given by taking property and equity as collateral. But when the country entered a low interest rate period of zero to 1 percent, 10 banks closed between 1986 and 1997.