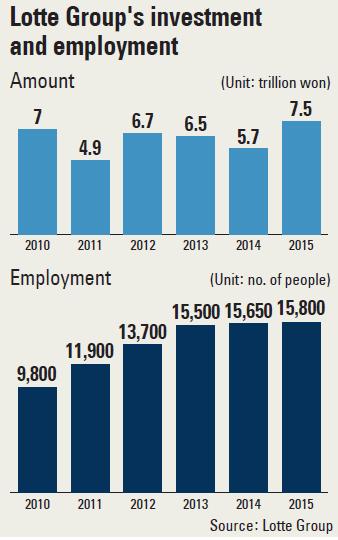 According to the investment and employment plan for 2015 released Sunday, the group will increase its investment by 32 percent this year from 5.7 trillion won in 2014.

Such a large expenditure during a slow economy is in line with Lotte Chairman Shin Dong-bin’s aggressive management and determination to identify drivers of future growth.

According to Lotte Group, the chairman emphasized the conglomerate should not shortchange investment in the future, even if the current business environment is unfavorable.

Lotte Group’s plan to increase the size of its workforce is consistent with annual increases in hiring since 2010.

According to the chairman, the group plans to focus its 2015 investing in future-growth businesses.

Retail investment will concentrate on establishing the so-called omni-channel, which Lotte considers a growth driver, along with the opening of new outlets and supermarkets.

Omni-channel refers to the convergence of online, offline and mobile shopping platforms.

Lotte intends to establish the omni-channel based on various local online and offline retail stores to compete with global retail companies entering the domestic market.

“If Lotte succeeds with the omni-channel, it will be as competitive as global retailers such as Amazon,” said Shin.

Lotte Chemical is poised to start construction of an ethane cracker plant in Louisiana that will use low-cost shale gas. A total of 1.5 billion won will be invested in the joint project with U.S. petrochemical company Axiall Corporation, with the goal of commencing commercial production in 2018.

The group will put 3.7 trillion won into construction of Lotte World Tower and Mall, which is scheduled for completion at the end of 2016.

In the food sector, the company is preparing measures to counter slow growth in industry and the demographic change in which the elderly population increases.

To this end, it plans to invest in overseas markets as well as creating premium and healthy food products.

In addition, Lotte will use 600 billion won to boost production of its popular Kloud beer at the Chungju-1 Plant and build a second plant scheduled to be ready by the end of 2017.

In the tourism and service sectors, it will focus on raising its brand awareness through overseas expansion and marketing that focuses on inbound foreign tourists.

Lotte Hotel plans to operate 40 properties in Korea and overseas by the end of 2018 through steady expansion in Asia.

In addition, the group plans to open duty free shops in Southeast Asia and Japan.

Lotte’s announcement followed a meeting between the government and the country’s 17 conglomerates on Feb. 11. At the meeting, presided over by Yoon Sang-jick, minister for trade, industry and energy, executives agreed to invest a combined 34.4 trillion won this year, while the government promised it would support them by easing regulations on chaebol entering new business areas, and on mergers and acquisitions.

Samsung Electronics is scheduled to begin construction on a new semiconductor production line by June in Pyeongtaek, Gyeonggi. The estimated cost of the line is 15.6 trillion won.

Samsung Display and LG Display are scheduled to expand their OLED display lines instead of moving production overseas. Each project is worth at least 4 trillion won.

The remaining 12 trillion won will go to government-led projects introduced on Wednesday. Scheduled to get under way as early as the first half of the year, the projects largely involve expansion of oil refineries and renovation of factories to make them more environmentally friendly.

Hyundai Motor Group, the nation’s top automaker and second-largest conglomerate by assets, also announced its biggest-ever investment for the next four years. Chairman Chung Mong-koo said in his New Year’s address the group will invest 80.7 trillion won through 2018.

The automaker will invest roughly 20 trillion won a year for the next four years. This would be 35 percent more than the largest annual investment the company has made, which was 14.9 trillion won in 2014.