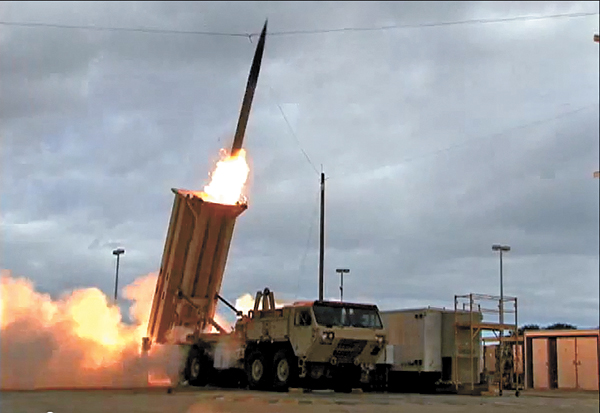 Thaad missiles can be fired from a mobile launcher. [JoongAng photo]

With growing controversy in Northeast Asia surrounding U.S. ambitions to deploy an advanced antiballistic missile defense system on the Korean Peninsula, the Pentagon has reversed its earlier position that Seoul and Washington were discussing the issue.

In the latest media briefing, the Pentagon’s press secretary made clear the United States and South Korea are not having official discussions on possible deployment of the Terminal High-Altitude Area Defense system, better known as Thaad.

Kirby said it is for the South Korean government and its people to decide what is of strategic value to their country.

The Pentagon’s verification came as Seoul, Washington, Beijing and Moscow have been engaged in an intensifying diplomatic tug-of-war in recent weeks over possible Thaad deployment. Throughout this month, defense officials in Beijing and Washington took turns nudging Seoul to make up its mind.

Thaad is a U.S. defense system designed to shoot down missiles using a hit-to-kill approach. Because it is equipped with a radar system that can cover more than 1,000 kilometers (621 miles), deployment of a Thaad battery in Korea has been a sensitive issue. Both China and Russia see it as a threat to their security interests that could be used for surveillance.

Beijing and Moscow appeared to be particularly sensitive to the Thaad system because of the AN/TPY-2 - a high-resolution, rapidly deployable X-Band radar designed to detect, track and identify ballistic missiles at long distances and very high altitudes.

During a press conference Feb. 10, Kirby said South Korea and the United States were discussing possible deployment of Thaad.

“I think we all recognize the importance of the capability,” Kirby said about the Thaad system in Washington. “There are constant discussions, and certainly with our South Korean allies about that.”

While offering no details, Kirby said, “It’s an important capability. It’s one that we talk to them about. That’s really as far as I can go today.”

“It would be untruthful to say we haven’t informally discussed [it] because we already had a site survey in the ROK [South Korea] and Gen. [Curtis] Scaparrotti said he wanted it,” Pool told Korean correspondents in Washington, referring to earlier statements by senior U.S. defense officials.

Deputy Secretary of Defense Robert Work said last year the United States had conducted site surveys and was working with the South to make a decision on the deployment. Scaparrotti, commander of U.S. Forces Korea, also said last year he had asked Washington to deploy Thaad.

Jolted by the Pentagon officials’ remarks, Seoul quickly demanded an explanation because it has maintained no talks on Thaad ever took place.

When Kirby’s first comments were relayed, dozens of Korean and U.S. defense and foreign affairs officials were attending an annual defense exercise in Seoul on Wednesday. During the Extended Deterrence Policy Committee tabletop exercise at the Korea Institute for Defense Analyses, South Korean officials asked their U.S. counterparts to clarify the remarks from Washington, a participant said.

David Helvey, deputy assistant secretary of defense for East Asia policy who was in Seoul for the meeting, consulted with Washington and had a telephone interview with Korean reporters at the Defense Ministry.

“I want to affirm that we have not had any consultation between the Korean and U.S. governments regarding the deployment of Thaad,” Helvey said.

Stressing that the United States has yet to make a decision on the deployment, Halvey said any discussion about Thaad at this point is “premature” and Washington will consult with Seoul if it decides to move forward.

“The United States is very well aware of Korea’s sensitivity to the issue,” he said, asking for anonymity. “Recently, Korea and China had talks on the possible deployment of the Thaad, and the latest remarks from Washington were probably to express its displeasure.”

Seoul said it is maintaining its “strategic ambiguity” over the issue as its predicament grows deeper between Washington’s push and Beijing’s pressure to reject the plan.

“Some criticized the National Defense Ministry for vacillating or having no strategy, but strategic ambiguity is exactly what we need right at this moment,” Han said.

Admitting that his Chinese counterpart had expressed Beijing’s concerns about the possible Thaad deployment during talks in Seoul earlier this month, Han said, “I told him that this is an issue in preparation for North Korea’s nuclear and missile threats.”

During his meeting with Han on Feb. 4 in Seoul, Chinese Defense Minister Chang Wanquan expressed his country’s concerns about Thaad deployment. Han reaffirmed that Seoul’s position remained unchanged and Washington had neither made a decision on deployment or a request to Seoul. He also told Chang that no discussions took place between Seoul and Washington on the issue.

Russia, through its new envoy to Seoul, also expressed its opposition to Washington’s plan last week.

“We are concerned about continued attempts to bring about confrontations in the region,” Russian Ambassador to Korea Alexander Timonin said in a speech on Diplomatic Service Day of Russia on Tuesday. “We regard the U.S. intention to extend its global missile defense system to the Asia-Pacific region as counterproductive and destabilizing.”

While Seoul insists on “strategic ambiguity,” critics say it has invited the controversy by failing to provide a convincing answer on how to fill the hole in its air defense against the North’s threats.

Korea has said it will build its own shield, named Korea Air and Missile Defense, to deter the North. Unlike Thaad, it focuses on a terminal-phase, low-altitude missile defense. The military also said it will establish the “Kill Chain,” an integrated information, surveillance and pre-emptive strike system to eliminate North Korean threats before they are launched.

Defense officials, however, said it will take years to complete the two systems - perhaps around 2022 - at a cost of 17 trillion won($15.45 billion). The timeline and cost have influenced Seoul and Washington’s recent decision to indefinitely delay the U.S. handover of wartime operational control of Korean troops.