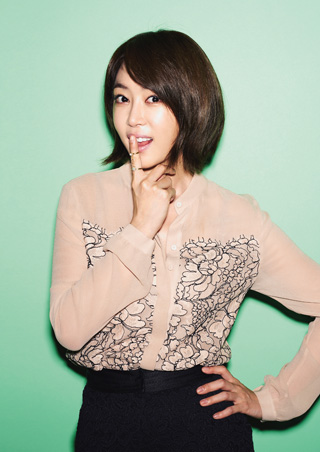 Actress Kang Ye-won has earned a smart, city-girl image by starring in TV shows like “Bad Guys” last year and the 2011 film “Quick.”

However, when the 33-year-old actress decided to appear in the second series of MBC’s spinoff show to “Real Men,” where celebrities get admitted to a military camp and experience army life, she had to let go of her polished image and show her real self.

Kang’s candid aspects were far from what viewers had expected.

She wiped off her makeup without hesitation, which frankly revealed her flushing face, while her bulky spectacles gave her a decidedly goofy persona. 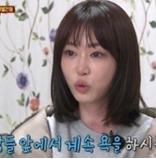 In addition to mere surface qualities, her immature attitude and below-average score in training made her kind of an ugly duckling among her peers, including actress Kim Ji-young and Park Ha-sun and comedian Ahn Young-mi, which led her to shed tears on the show numerous times.

When a reporter from Ilgan Sports, a Korea JoongAng Daily affiliate, met Kang in a cafe in southern Seoul for an interview, she was more like the soft-hearted and offbeat character we saw in “Real Men.”

Now that she is finished with the tiring and teary five-day military experience, Kang could more easily talk about what it was like to be a part of the show.

Q.Tell us how you decided to participate in the show.

A. Until my manager told me that I was offered a spot on the show, I hadn’t even watched the show once. I asked my manager if the show would help my career in the future and he said that it would be a nice opportunity to approach the public in a more friendly way. And since I have a habit of being too nervous when I am on a show, it would have helped me get rid of that nervousness as well.

So you did not watch the first season at all?

I watched the first episode, but the scriptwriters of the show asked me to refrain from watching it in order to make the show more realistic. I was not supposed to have any prior knowledge about military camps. Come to think of it, I was too naive. I wasn’t fully prepared.

Why did you cry so much during the show?

I am an emotional person to begin with. I get really tearful in sad or harsh situations. But on the bright side, I don’t cry over what has already transpired. But after I actually appeared on the show, I read some online comments saying, for example, that I should get admitted to a mental clinic, which I felt really bad about.

Wasn’t it hard as an actress to reveal your naked face and wear your thick glasses during the show?

I wanted to hide my glasses for the rest of my life. But even if I tried to hide them, it would get revealed sooner or later, being part of such a harsh reality show. So I thought I might as well give up on trying to look pretty from the beginning.

What changed after appearing in the show?

I got to know a part of myself that I didn’t know before. I truly thought that I would get along fine in the military camp. I even told the other contestants that my leadership would help guide others! I also felt very flexible about revealing my true self to the public after the show.

Who would you recommend for the third season of the show?

I don’t want to recommend others so easily. But if there is a woman who recently went through something difficult or wants to posses a strong mindset, I would encourage her to join the show.