Stitching together a lost tradition

Stitching together a lost tradition 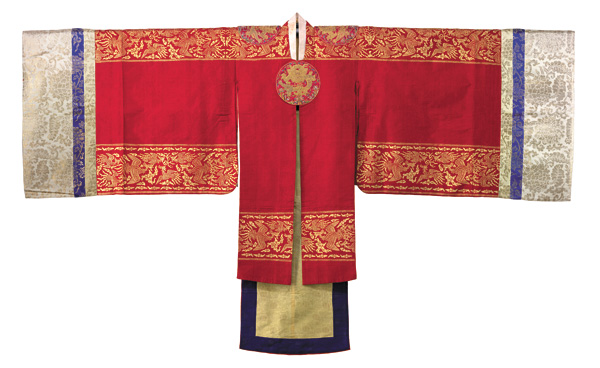 This bridal gown of the wife of Crown Prince Yeongchin (1897-1970) is an iconic ancient Korean textile featuring gold thread. Provided by the National Palace Museum of Korea

They looked like average university students, but the loom and the materials they were using were anything but ordinary.

They were using a draw loom, an ancient weaving device that is no longer used in Korea, and the gold thread they were weaving with is also unfamiliar to Koreans.

A team of researchers at the Korea National University of Cultural Heritage here in the quiet, bucolic city of Buyeo in South Chungcheong - about a two-hour drive from Seoul - announced last week that they had successfully restored Korea’s ancient techniques for making gold thread and weaving it into textiles.

They invited journalists to the university to demonstrate the methods and to present the findings of their study that began in 2011.

“Countless numbers of ancient textiles uncovered in Korea feature gold thread, but we were never able to restore them because we didn’t know how our ancestors made the thread and weaved it into textiles,” said Sim Yeon-ok, a professor in the university’s traditional textile art department, dressed in a beautiful pale pink hanbok also decorated with gold thread that was incorporated using modern techniques.

Sim, who has been studying traditional textile art for 30 years, happens to be the mother of actor Jung Il-woo, who has appeared in many epic dramas.

Gold weaving in Korea has been a mystery for centuries; Just how did Koreans make and weave with gold thread? 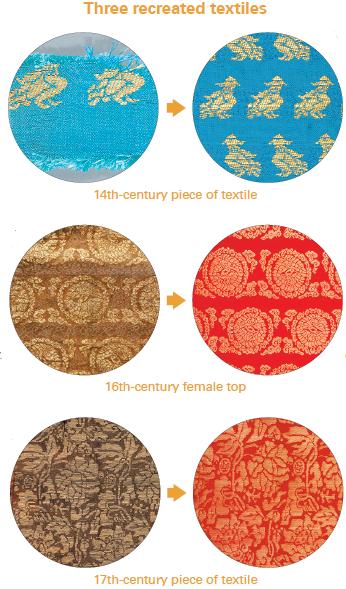 An exquisite red bridal gown from the Joseon Dynasty (1392-1910); a piece of turquoise textile with a duck pattern from the Goryeo Dynasty (918-1392); and a cute little color-block pouch with a drawstring also from Goryeo all feature shiny gold thread.

The research team found that if you melt gold and cut it into long, thin sticks (a similar method to making noodles), they would break before you could even make a stitch. So what materials can be added to make gold more malleable? And what portion of the thread would be pure gold? No one in the country knew the exact answers to these questions.

In 1733, King Yeongjo - who valued a modest lifestyle and worked to improve the lives of the common people - banned the use of draw looms nationwide because he believed that weaving gold into textiles was an unnecessary luxury.

In the following decades under his rule, the traditional Korean techniques of making gold thread and weaving it with a draw loom vanished completely.

As a result, Koreans could never fully restore artifacts that had gold thread in them and were in bad shape (which is often the case with artifacts found underground). Restoration workers could only imagine what they would have originally looked like. 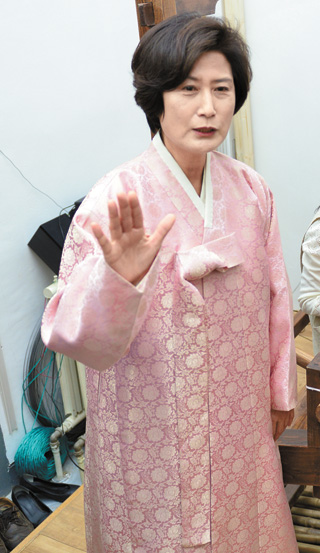 “Gold is an expensive and luxurious material, but it’s also highly durable, retaining its shape for a long time,” said Lee Seon-yong of the university’s Traditional Textile Restoration Research Institute. She worked with Sim on the project.

“Gold threads are found in relics as old as those from the Three Kingdoms era [57 B.C. to A.D. 668],” she explained, “and they are also found in artifacts from the ensuing Goryeo Dynasty and Joseon Dynasty. They are undoubtedly the most decorative material used in Korean textile crafts.”


Piecing history back together

The researchers on Sim’s team started out by sifting through about 120 written documents from Korea as well as neighboring China and Japan related to textile production.

They found that Koreans combined gold leaf with traditional mulberry paper called hanji, which is well-known for its durability. And depending on what type of cloth the thread would be used to make, what it looked like and where it was made, there were dozens of different types of gold thread.

“We also learned that ancient Koreans used agyo [a transparent, traditional adhesive] to stick gold foil onto the mulberry bark,” Lee said, “but at times they added red soil to agyo, which would accentuate the yellow shine of the gold.” The thread makers would then cut it into long, thin strips, researchers found.

The next step of the project was studying the real thing: cloth artifacts.

Sim’s team chose 110 relics and conducted a variety of scientific tests on them. Their biggest discovery in this stage of the project was reaffirming that Korea had a unique thread-making process. Whereas Koreans used mulberry paper, Japanese used wood pulp from the Gampi shrub and Chinese used pulp from bamboo.

“We learned that Korea indeed had its very own methods for making gold thread,” Sim said. “Before we just didn’t know if the gold threads were Korean-made or imported from elsewhere.” 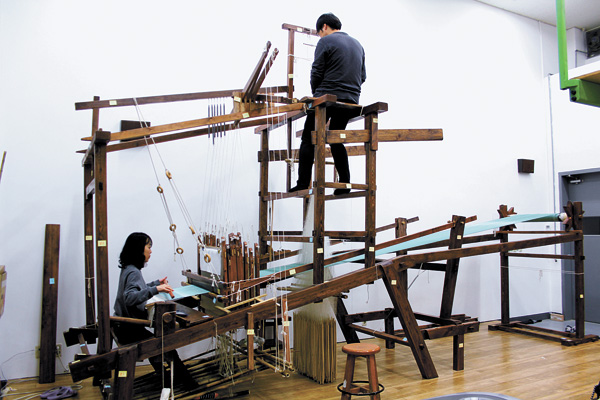 The next step was finding the optimal type of mulberry paper to use; the correct density of the adhesive; and the appropriate thickness of gold foil that would produce gold thread that looked the same as those made hundreds of years ago. After numerous tests, the team arrived at what they believed to be the best combination of products, and they also recreated a traditional draw loom based on historical documents.

Finally, with the gold thread and loom ready, they made replicas of three ancient textiles - one from the Goryeo era which is a national treasure, and two from the Joseon. The gold foil they used is mass produced at a factory, so the resulting pieces were not 100 percent traditional. But still, Sim’s team was thrilled.

“The findings are the result of a four-year project, but actually it’s the work of three generations,” Sim told journalists, her voice emotional. “My late teacher, Min Gil-ja, has been working on this for decades. And the restoration wouldn’t have been possible without the hard work by our students [at the university].”

Sim said that what they discovered is certainly meaningful, but there’s more work to be done. “We will continue our research and supplement our findings.”

Yoo Jae-eun, an official at the National Research Institute of Cultural Heritage, who was also at the event, said, “it’s notable that the restoration has set a good example in the area of restoring traditional techniques that are gone today.”

The Korean government has been attempting to preserve the country’s traditional skills by designating them as Important Intangible Cultural Property.

Under this system, the government labels a part of Korean culture as traditional, for instance the methods for making earthenware, along with a person who has learned that skill, often handed down from a famous master. They then provide financial assistance to that person so he or she can carry on teaching the skill to the future generation.

But this system has been under fire for many years. Most criticisms have centered on whether or not the government was objective in its selection of artisans.

“We understand that there has been both envy and jealousy aimed at those who are selected, leading to inner conflicts among the artisans,” Lee Jong-hee of the Cultural Heritage Administration (CHA) admitted to journalists in November. “We will try to improve the system if there is a need.”

But a bigger problem is that although the government has listed about 200 traditions and skills as cultural property, those that were lost centuries ago are often ignored because they cannot be passed down, as in the case of gold thread and draw loom weaving.

The danger of losing tradition came to the forefront in 2013, when criticism mounted over what appeared to be an imperfect restoration of the Sungnyemun Gate, National Treasure No.1.

The 600-year-old gate was set on fire in 2008 in an arson attack and was later restored in a high-profile and costly reconstruction in which the government claimed traditional techniques were used.

But just five months after the restoration was complete, the color fading off the wooden gate caused the largest scandal in the history of Korean cultural properties.

Investigations revealed a flawed process. Among the problems were the use of imported color pigment and improper adhesives.

Last year, the CHA proposed the creation of a foundation to study traditional building materials and techniques by 2016. Kang Kyung-hwan, a former head of CHA’s cultural preservation department, said at the time that there were calls for such an entity because of the issues with pigments and adhesive during the Sungnyemun restoration.

It remains to be seen if the construction group will be launched after all, and if it would be able to revive ancient techniques that exist only in books and artifacts.

In the meantime, the draw loom at the Korea National University of Cultural Heritage in Buyeo continues to operate. Sim’s team hopes to use the gold thread and their new craft not only in traditional textiles, but also to make contemporary art and items to promote tourism.