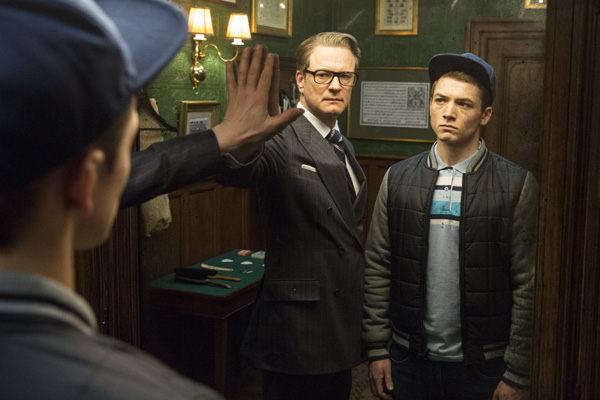 In “Kingsman: The Secret Service,” directed by Matthew Vaughn, Harry (Colin Firth), left, is a member of exclusive spy agency Kingsman who trains Eggsy (Taron Egerton) for acceptance into the secretive spy circle. Provided by the distributor

Last weekend’s box office is seen in the industry as an indicator of which films will be most popular during the five-day Lunar New Year holiday that starts Wednesday.

With increased comedy and a more complex storyline, the film features our favorite detective duo of Kim Min (Kim Myung-min) and Seo Pil (Oh Dal-su) unraveling a mysterious case of silver trade during the Joseon Dynasty (1392-1910).

Actress Lee Yeon-hee plays the charming yet secretive geisha Hisako, who owns many clues to solving the case.

Directed by Matthew Vaughn, the film went viral in Korea for its ambitious venture into redefining the scope of spy films to simultaneously encompass beautiful action scenes, black comedy and a good dose of humor.

Musical drama “C’est Si Bon,” based on the legendary music hall of the same name that existed back in the 1960s, was in the third place two weeks after its opening.

Despite ambitious marketing backed by CJ Entertainment prior to its release, the film failed to reach the upper echelon of the chart.

The film sold 216,680 tickets over the weekend to bring its two-week total to one million.

Animated films were strong players in the weekend cinema as well, selling like hot cakes to young viewers.

It was followed by U.S. animated feature “Legend of Oz: Dorothy’s Return” in seventh place.

In eighth place was the feature-length version of “Detective Conan: Missing Conan Edogawa Case - His History’s Worst Two Days.” The movie is based on the famous Japanese comic book series “Detective Conan.”