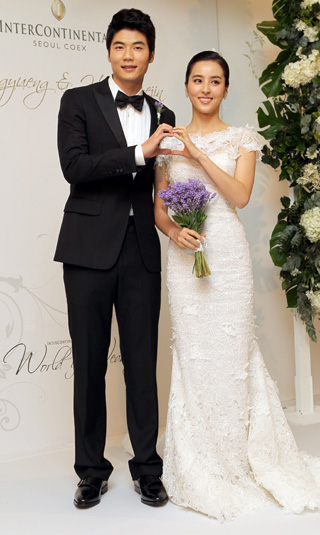 Namoo Actors, Han’s agency, said on Sunday that, “She is in the early stages of her pregnancy.”

Prior to the press release from Han’s agency, Ki did a thumb sucking celebration after he scored a goal during a match against Manchester United at Liberty Stadium in South West Wales on Sunday, local time.

Since many football players perform a thumb-sucking celebration when their wives become pregnant, local news outlets ran speculative stories about Han’s possible pregnancy after the match.

According to the agency, Han is currently staying in Korea, not in Britain.

She made her acting debut in 2002 and has been actively pursuing her career even after marrying Ki, who is eight years younger than her.

After her most recent film “Man in Love,” in which she pairs up with actor Hwang Jung-min of “Ode to My Father,” she has been taking time off in Britain.