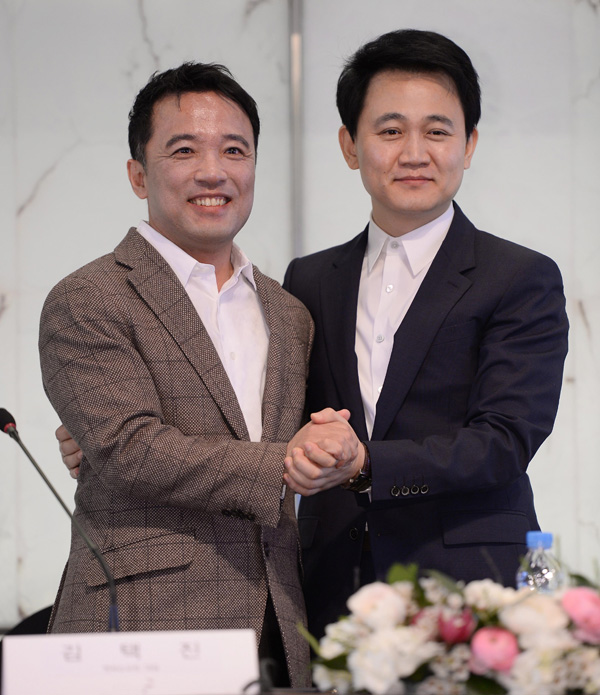 NCsoft CEO Kim Taek-jin, left, and Bang Jun-hyuk, chairman of the board of directors at Netmarble Games shake hands after signing a partnership on Tuesday in Seoul. [NEWSIS]

Game company NCsoft, which has been locked in a feud with its largest shareholder Nexon over control of management, has turned to Netmarble Games to help save the game developer from being taken over by Nexon.

NCsoft, the nation’s second-largest online game company after Nexon, said Tuesday it is selling its 1.95 million treasury stocks to Netmarble Games. The shares, worth 391.1 billion won ($353 million), account for 8.93 percent of NCsoft’s total shares. Last Monday, NCsoft announced that it would acquire 29,214 shares in Netmarble Games for 380.3 billion won.

Through the mutual equity swap, NCsoft has increased its amount of friendly shares to more than the amount held by Nexon.

NCsoft has said it has decided to partner with Netmarble to diversify its areas of business. Netmarble is the No. 1 mobile game maker in Korea, with games such as Everyone’s Marble and Taming the Monster. 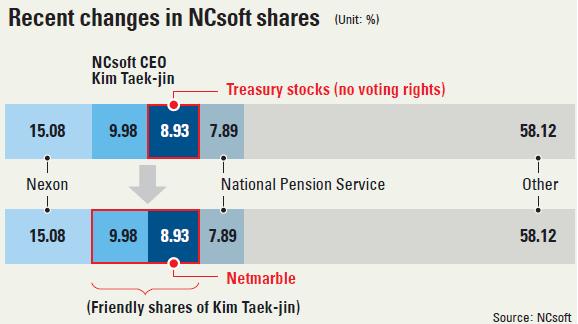 On Tuesday the two companies held a ceremony to announce their strategic partnership and agreed to share some intellectual property.

They will work together to enter the global mobile game market.

“We have been thinking for many years that we need to enter the mobile gaming market,” Kim said. “This partnership has nothing to do with Nexon,” said Kim Taek-jin, CEO of NCsoft.

But the gaming industry has interpreted the partnership as a move by NCsoft to block Nexon from assuming a management role in NCsoft.

Although treasury stocks do not include voting rights to influence management when held by the original company, the right is given if they are sold to a third party.

The 9.98 percent of shares held by NCsoft’s Kim combined with the shares recently purchased by Netmarble amount to 18.91 percent of friendly shares with voting rights.

This exceeds the 15.08 percent of shares held by Nexon, which means that NCsoft will likely override Nexon at the general shareholders’ meeting if there is a vote on whether Nexon can become more involved in management.

The equity swap contradicts NCsoft’s refusal of Nexon’s earlier request to buy of its treasury stocks.

“The large-scale investment, which influences shareholders’ values significantly, has been made by NCsoft without any communication with its largest shareholder,” said a spokesman for Nexon. “It is questionable whether NCsoft’s decision is really for the long-term growth of the company and is respectful of the rights of its shareholders.”