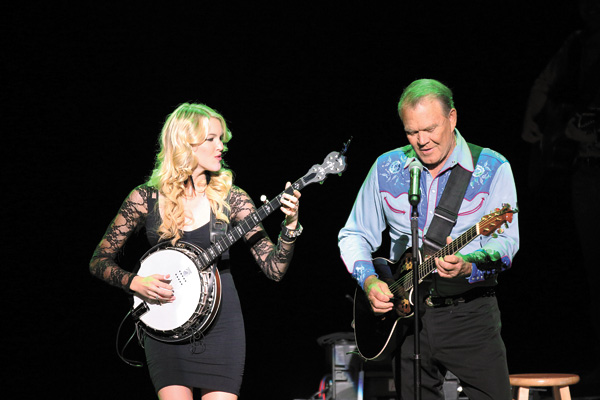 Ashley Campbell, left, and Glen Campbell performing during the Goodbye Tour, in a scene the documentary film, “Glen Campbell... I’ll Be Me.” [AP/NEWSIS]

NEW YORK - Glen Campbell’s daughter says that although she can’t have a typical conversation with her father, who suffers from Alzheimer’s disease, she’s able to speak to him through music.

“When you sit there and play a guitar right in front of him, it really seems to reach him,’’ Ashley Campbell said in an interview this week. “So I try to do that as often as I can.”

The 28-year-old daughter of the country music icon says it is tough watching her father suffer from the disease, but she’s hoping to carry on his legacy with her own music career.

She sings an original song called “Remembering” and a cover of “Home Again” on the soundtrack for the documentary about his life, “Glen Campbell...I’ll Be Me.” The soundtrack also features “I’m Not Gonna Miss You,” the track that’s earned Glen Campbell a nomination for best original song at Sunday’s Academy Awards.

“It’s just so amazing that my dad’s song is getting so much recognition, especially now that he really can’t speak for himself,” said Ashley, who attended the Oscars with her mother and brothers.

Her 78-year-old father’s song won the Grammy for best country song earlier this month. It appears on the documentary’s five-song soundtrack, released in September; a 10-track version of the soundtrack, featuring “Remembering,” was released Tuesday.

“I had to get it off my chest,” she said of writing the heartfelt “Remembering,” which features the lyrics, “We can talk until you can’t remember my name, daddy don’t worry, I’ll do the remembering.”

“I wanted to write about the relationship between me and my dad and how it’s changed so drastically,” she said. “About how your parents take care of you when you’re little, but as they get older, it’s your job to take care of them.”

She says her father, whose hits include “Rhinestone Cowboy’’ and “Southern Nights,’’ is currently receiving care at a facility close to their Nashville home.

“We’re holding up,’’ she said. “We see him every day. He’s really doing well there. He’s happy and he gets lots of hugs, and he’s enjoying his life in whatever way he can.”

Ashley Campbell appears in the documentary about her father, released last year, and she performed on his final tour, which wrapped in 2012.

“The main thing that I take away from the tour is not the stage time, but it’s the time I got to spend with him on the bus and hotel rooms, especially knowing it was not going to last,’’ she said. “It was such precious time.” AP