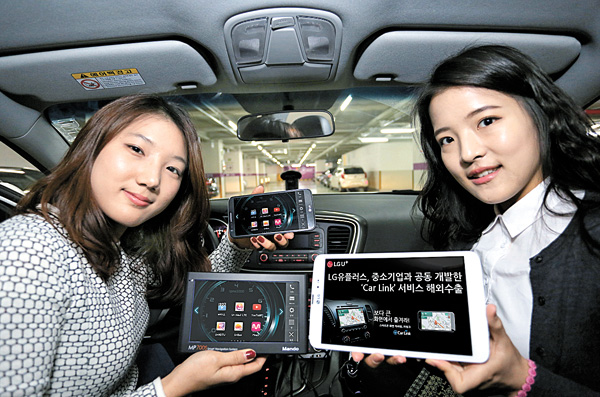 Car Link is what is known as a mirroring service for cars to connect smartphones wirelessly with car navigation devices. Provided by the company


LG U+, the nation’s third largest mobile carrier, has entered the connected car industry, which brings together the auto industry, information and communications technology (ICT) and the Internet.

With the company’s Car Link service, users can connect their smartphones to their vehicles.

The mobile carrier will be exporting its Car Link service - which it co-developed with UBridge, a local business - to the Middle East.

Afterward, the company hopes to expand into the global smart car market in other countries to compete against Google’s Android Auto and Apple’s Car Play.

“The development of information technology is changing the concept of automobiles,” Lee Sang-chul, the vice chairman and CEO of LG U+, said in January at the CES 2015 in Las Vegas. “In the future, cars will evolve to be one’s own space.”

LG U+’s Car Link allows users to operate their smartphones via the navigation screens in their cars, which are larger than the screens of their mobile devices.

Users can play videos or music, log on to social networking services and even make or receive calls on the navigation screen.

Car Link differs from similar services in that it connects with the navigation device wirelessly, LG U+ said.