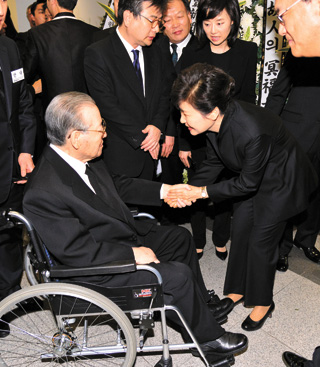 Former Prime Minister Kim Jong-pil shakes hands with President Park Geun-hye after he escorts her from the mourning altar set up for his late wife, Park Young-ok, at Asan Medical Center on Monday. The two had a meeting that lasted about 10 minutes. [NEWSIS]

President Park Geun-hye visited the mourning altar set up for her late cousin and wife of two-time Prime Minister Kim Jong-pil, a visit that underscored the impact Kim has had on the Korean political landscape over his nearly 50-year career in politics.

Dressed in black, President Park visited the Asan Medical Center on Monday to mourn the death of Park Young-ok, who succumbed on Saturday to her battle with urethral cancer at the age of 86. The couple were married for 64 years.

Park and Kim had a 10-minute conversation in private.

Kim escorted Park out of the hospital in a wheelchair.

Park’s visit made news given the special relationship between Kim and her family. He was first named prime minister in 1971 by the president’s father, strongman Park Chung Hee, and served for four years. Kim once called his relationship with Park Chung Hee “comrade-like.”

A big part of Kim’s political legacy comes from Kim’s relationship with Park Chung Hee, who ruled the country with an iron-fist from 1961 until his 1979 assassination, during which Korea rose from the ruins of the 1950-53 Korean War to become an economic powerhouse.

But he also was instrumental in securing the presidency in 1997 for Kim Dae-jung, Park Chung Hee’s political nemesis.

Kim married Park Young-ok, the daughter of Park Sang-hee, the older brother of Park Chung Hee, in 1951, two months after the former president introduced the couple. Kim collaborated with Park to plot the May 16 military coup that toppled a civilian government in 1961 in the name of reforms for the poor and corruption-ridden state. Kim is known to have drafted a declaration of policy after the coup, proclaiming that anti-Communism was the state’s No.1 priority.

Kim was named the first head of the nation’s main spy agency, the Korean Central Intelligence Agency, now called the National Intelligence Service. Kim was a point man in normalizing diplomatic ties with Japan in return for compensation for its 36-year colonial rule of the peninsula in 1964, which sparked a wave of fierce protests nationwide. The loans and financial aid from Tokyo laid the groundwork for Korea’s industrialization under the guidance of Park Chung Hee.

From the late 1980s, Kim rose to political prominence and began to be called one of the three Kims, referring to the three prominent politicians at the time, which included Kim Dae-jung and Kim Young-sam, who also went on to become president.

After elections were restored in the late 1980s, Kim Jong-pil sided with Kim Young-sam in 1992 and helped him take the Blue House in that year’s election. Five years later, Kim switched sides and helped Kim Dae-jung, who later received the Nobel Peace Prize, win the presidency.

Kim Dae-jung appointed him prime minister for the second time in 1998. He served for two years.

Of the three Kims, only the 89-year-old Kim Jong-pil failed to win the presidency, but few doubt his mark on the Korean political landscape.

In testament to such a large role, political figures across party lines visited the mourning altar for his wife to deliver condolences.

During meetings with the politicians who visited the altar over the past three days, Kim gave advice looking back on his political life, which began on the night of the coup on May 16, 1961.

“Think of the people as tigers,” Kim told junior politicians visiting the altar. “You feed tigers and bathe them to keep them comfortable all the time. And you might think you have befriended them. But once you step on their feet, they will jump to bite you.”

In another remark, Kim said serving as politicians is an “empty job,” meaning all the benefits of your work of politics will go to the people.

“If you seek to have your share,” he warned, “you will find yourself in jail.”