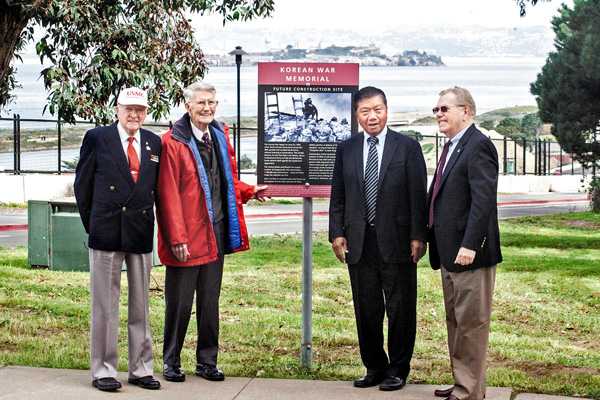 SAN FRANCISCO - A new Korean War memorial is set to be unveiled in San Francisco in July thanks to efforts by 94-year-old war veteran Lt. Col. John R. Stevens.

The Korean War Memorial, a $3.4 million project, will be set up next to the San Francisco National Cemetery in Presidio, San Francisco, and showcase walls 12.2 meters (40 feet) high and 3 meters (9.8 feet) wide.

In August 1950, he commanded more than 140 U.S. soldiers against North Korean People’s Army in the First Battle of Naktong Bulge in August 1950, and was active in the Incheon landing, the capture of Seoul and the Chosin Reservoir, as well as other campaigns throughout the war.

Stevens, who spent more than two decades in the Marine Corps, serves as secretary to the Korean War Memorial Foundation, a non-profit organization founded in 2010 aimed at building the memorial in Presidio to educate future generations about the sacrifices made in the war.

“The Korean War was the most meaningful event in my life,” Stevens told the JoongAng Ilbo earlier this month, adding that South Korea, after 65 years, has “advanced greatly.”

The money to secure the site for the memorial and build it was raised by the Korean-American community and Korean companies. The foundation also collected more than $214 million in donations from across the United States last year.

U.S. Senator Dianne Feinstein of California helped procure the location of the memorial adjacent to the San Francisco National Cemetery, where 2,237 Korean War veterans are laid to rest.

The location is on approximately the same latitude as Incheon, at 37 degrees north. The site also faces west, across the Pacific and toward South Korea.

The foundation said that it expects to break ground in May and complete building on the memorial by July.

A circular bronze plaque 1 meter (3 feet) in diameter is expected to be embedded in the pavement at the entrance to the memorial plaza to acknowledge the participation of the United Nations Allied Forces.

The memorial will also feature bronze bas-relief depicting pivotal moments during the Korean War, such as the U.S. Marines landing in Incheon in 1950.

“Once the memorial is completed, I feel like I can comfortably go to join those war veterans who departed before me,” Stevens said.