National patriot to get new monument in Russia

National patriot to get new monument in Russia 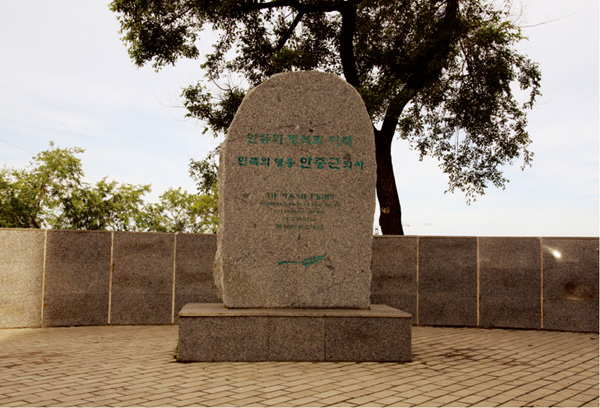 A memorial to honor Korean independence fighter Ahn Jung-geun stands in Ussuriysk, Russia, before being torn down.[Independence Hall of Korea]

A memorial to honor Korean independence fighter Ahn Jung-geun (1879-1910) in far-eastern Russia that was torn down due to a lack of interest is expected to be reinstalled this spring in Ussuriysk.

The Korean Ministry of Foreign Affairs and the Independence Hall of Korea are expected to complete a memorial dedicated to Ahn in Ussuriysk in Primorsky Krai, north of Vladivostok, as early as April, a Seoul official said on Monday.

It will be built next to a memorial that celebrates 150 years of Korean immigrants to Russia.

Ahn is considered a national hero who, on Oct. 26, 1909, assassinated Hirobumi Ito, the first Japanese resident-general of Korea and a four-time prime minister.

An Ahn Jung-geun memorial was originally built in front of the Vladivostok State University School of Medicine. In 2002, Seoul Health and Theology Institute signed a memorandum of understanding with the Vladivostok university to build the memorial to commemorate Ahn and spread awareness about his fight for Korean independence.

In 1907, Ahn exiled himself to Vladivostok to join with the armed resistance movement there to fight against Japanese colonial rule, which lasted from 1910 to the end of World War II.

However, a new dean in the School of Medicine decided to tear down the worn-down memorial a decade later in 2012, unaware of Ahn’s crusade or Korea’s independence movement against Japanese colonialism.

The former memorial only had Ahn’s name inscribed in Cyrillic and did not provide information about the independence movement. In Korean, it said: “The happiness and future of humankind, the hero of our people Ahn Jung-geun.”

Because the memorial was built and maintained by a civilian group, the Korean government was not informed about the lack of information nor its maintenance.

The Korean Ministry of Patriots and Veterans Affairs and other related agencies became aware that the memorial was taken down after it was removed and stored in Vladivostok City Hall.

Then the Korean government began to prepare to restore and reinstall the memorial.

The original memorial stood around 1 meter (3.2 feet) high, but the Patriots Ministry raised money to expand it and add information on Ahn’s efforts fighting against Japanese colonial rule.

It will provide a brief biography: That Ahn was born in Hwanghae, Haeju, in what is now North Korea, and exiled himself in 1907 to Primorsky Krai, or the Maritime Province, where he was part of troops that protested Japanese colonization.

It goes on to describe how he assassinated Ito two years later in Harbin and died for his country the next year.

“We originally planned on launching the memorial last year, which celebrated 150 years of Korean immigrants to Russia, but because of a the cold weather and the strong winds, the construction process was delayed,” a Korean government official said. “While there was regret that the Ahn Jung-geun memorial was taken down at one point, we look forward to unveiling a sturdier memorial that puts greater emphasis on his patriotism.”