More than half of public supports use of Thaad

More than half of public supports use of Thaad 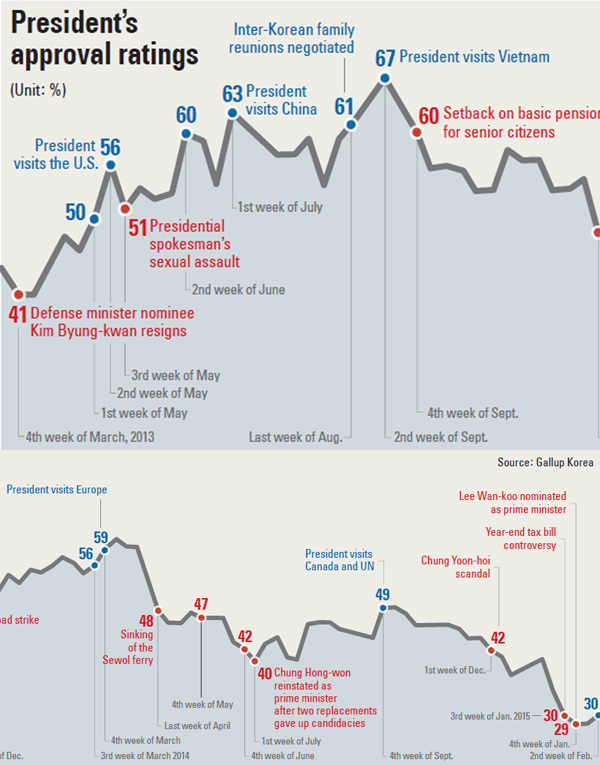 The JoongAng Ilbo conducted a nationwide survey over Sunday and Monday of 1,000 adults to evaluate the past two years of the Park Geun-hye administration, which marks its third anniversary Wednesday.

Of the respondents, 55.8 percent said that they “supported the Thaad as a means to counter the North Korean threat.”

In contrast, 32.6 percent of respondents said they did not support the Thaad “because it may increase diplomatic tensions with countries opposed to it such as China and Russia.”

Thaad is a U.S. defense system designed to shoot down missiles using a hit-to-kill approach. Because it is equipped with a radar system that can cover more than 1,000 kilometers (621 miles), deployment of a Thaad battery in Korea has been a sensitive issue.

Both China and Russia see it as a threat to their security interests that could be used for surveillance. Washington wants it deployed but claims it has yet to have official talks with Seoul on deployment of the Thaad battery in Korea.

The survey also tackled questions on what the Park administration has been doing well and not so well over the past two years.

The results showed that resolving economic issues in the country was a major concern of the general public. A third of those surveyed, or 33.1 percent, pinpointed “alleviating economic polarization” as the most pressing governmental issue at hand.

Following economic polarization policy, 22.9 percent of respondents said the most pressing issue for the Park administration was “economic growth.” Improving “quality of life” came in third at 13.7 percent.

Tied for fourth place were political reform and solidarity of the people, each at 9.1 percent.

Park’s best achievement over the past two years was her diplomatic efforts, according to 35.6 percent of respondents. This was followed by welfare at 18.4 percent and politics at 12.4 percent.

When asked to grade the government policies out of 100 points, respondents gave diplomacy the highest points of an average of 61.9, while economics received 52.3 points and politics 49 points.

Likewise, a majority of respondents, or 56.5 percent, was dissatisfied with the Park administration’s efforts to stimulate the economy and increase jobs, compared to 41.4 percent who were satisfied.

The president’s approval rating hit a record low of 29 percent last month following a Blue House influence?peddling scandal and a controversial rise in year-end tax bills for many middle-class Koreans.

According to Gallup Korea, Park’s approval rating hovered at 30 percent in the second week of February. It is rare for a president just entering her third year in office to sink below 30 percent in ratings. Her previous low had been in the beginning of July 2014 after two botched prime minister nominations resulted in her reinstating Prime Minister Chung Hong-won, who had resigned in April after criticism of the government’s incompetent handling of the sinking of the Sewol ferry earlier that month.

Over the past two years, Park’s approval rating has been the highest after her trips abroad. After a visit to China in late June 2013, her approval rating increased to 63 percent in the first week of July, more than a 10 percentage point increase from the end of May. Her ratings peaked at 67 percent in mid-September after a visit to Vietnam. Likewise, her approval rating was highest in the past year immediately following a visit to Europe in March, and peaked at 61 percent in the first week of April 2014. It plummeted following the sinking of the Sewol ferry on April 16 to 48 percent.

According to the survey, the ruling party however still maintained more support than the main opposition party, as 44 percent of respondents said they supported the Saenuri Party compared to 24.2 percent for the New Politics Alliance for Democracy. However, 25.8 percent did not respond or said they did not know.