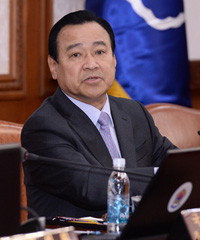 Newly appointed Prime Minister Lee Wan-koo vowed on Tuesday to exercise his every invested authority as the cabinet’s second-in-command, signaling a determination to wield his political clout.

“I will conduct a performance evaluation of ministers, vice ministers and government agency chiefs twice a year and exercise my rights as guaranteed by the Constitution,” Lee said, presiding over his first cabinet meeting at the Sejong Government Complex.

As prime minister, Lee is within his right to make presidential recommendations on the appointment or dismissal of ministers.

“I will not hesitate to invoke my authoritative oversight, including issuing a dismissal recommendation to the president, for officials who perform poorly or demonstrate a poor work ethic,” the former Saenuri floor leader added, stressing that government officials caught for corruption would be severely punished despite the circumstances.

The Prime Minister’s Office has yet to agree on the terms of the envisioned evaluation, though it is expected the first such assessment will be conducted by July.

Lee’s remarks Tuesday were seen as intended to quell lingering doubts over whether he could take a firm hold as the second prime minister in the Park Geun-hye government.

The newly appointed prime minister faced a raft of allegations that ranged from real estate speculation to draft-dodging, which caught both ruling and opposition lawmakers off guard. The National Assembly eventually confirmed Lee’s appointment as prime minister, however, by a vote of 148 to 128. Five votes were counted as invalid.

Still, such a close outcome only served to underscore the partisan split and exacerbated heated disputes over whether he was qualified to serve as prime minister, particularly considering how close he came to being dismissed.

But Lee’s address Tuesday appeared to be a testament to his resolve to carry out his job responsibly. The prime minister earlier stated he would make strong demands to President Park when necessary.

The Constitutional right Lee cited empowers prime ministers to make recommendations for the dismissals of cabinet members, an authority that experts say enables them to have some real grip on power.

In reality, though, such authority has rarely been invoked because of the concentration of power in the cabinet hierarchy. The fact that the prime minster is appointed by the president, rather than in an election, has also traditionally kept most former prime ministers in the shadows.