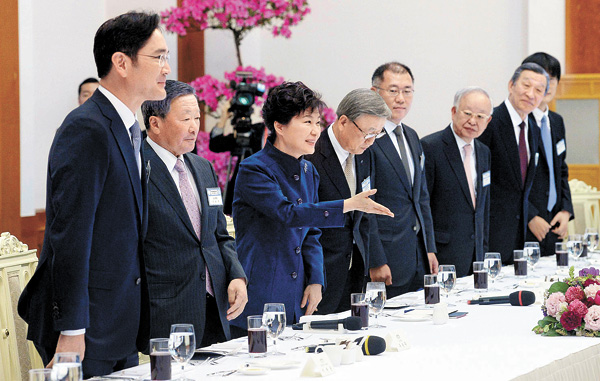 President Park Geun-hye invited heads of business groups to the Blue House for a luncheon Tuesday, asking them to keep investing and cooperate with the government’s efforts to nurture a creative economy along with cultural and arts industries.

Standing before the moguls, Park expressed her hopes that the private sector and government would keep working together to set up creative economy innovation centers and special industry belts for culture and the arts, which she said would create another industry built on creative ideas to contribute to national economic growth.

“I ask you to become the Korean Medicis on our path to open an era of cultural prosperity,” said Park, citing the Italian banking and political dynasty that rose to prominence in the 15th century and is credited for aiding the Renaissance through its financial support.

Noting that companies’ investments in cultural activities is “the most success-guaranteed investment for the future,” Park also asked the businessmen to continue their sponsorship and nurturing of innovative start-up companies.

On the 2018 Pyeongchang Winter Olympics, she asked the business groups for full support in sponsoring the event, expressing a hope that it will mirror the 1988 Seoul Summer Olympics’ raising of Korea’s profile internationally.

Park’s meeting with the businessmen came a day after she made a stinging remark about the National Assembly, accusing it of having dragged its feet in passing a package of bills aimed at deregulating the real estate market. In an address to presidential office secretaries at the Blue House, she described three real estate deregulation bills that were passed late last year following partisan bickering as “swollen noodles” that should have been served much earlier, saying that the effect of the bills was watered down because of their delayed passage.

Park’s comment drew objections from within the ruling Saenuri Party.

Former two-time lawmaker Lee Hye-hoon, who has a doctoral degree in economics and worked on Park’s presidential campaign in 2012, openly refuted Park’s remark, saying, “An era of economic growth driven by the construction industry is over” in a radio interview with CBS on Tuesday.

“It is too much wishful thinking now to hope for an economic revival through such measures [of real-estate deregulation],” said Lee. She said the core of the problems with the Korean economy is a sluggish domestic economy.

The former economist claimed the real key to a rebound is delivering on Park’s campaign promise of so-called economic democratization aimed to level the playing field for small-to-medium companies who work as subcontractors or suppliers to the giant chaebol. The Park administration has been accused by critics of failing to make good on its economic democratization campaign promise.