Samsung gets most admiration for 12th year

Samsung gets most admiration for 12th year 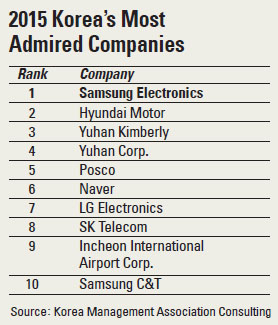 Samsung Electronics was named the country’s most admired company for the 12th consecutive year.

According to the 2015 Korea’s Most Admired Companies survey released by the Korea Management Association Consulting (KMAC) on Wednesday, the electronics giant was named once again the most respected company in the nation, as it has since the survey started.

The survey was conducted on a total of 11,190 people: 6,400 executives at conglomerates, 230 researchers at securities companies, as well as 4,560 consumers, from September to December last year. Each respondent was asked to evaluate companies on six qualities: ability to innovate, how it values shareholders, how it values employees, how it values customers, worth to society and brand image.

All of the companies in the top 30 scored seven points or higher out of 10 points in each of the categories, the KMAC said. But the survey also said that the gap between the All-Star companies and others is narrowing. In the social value evaluation, for instance, All-Star companies led the others by an average of 0.71 points last year, which was narrowed to 0.52 points this year.

Before the survey was conducted, the KMAC made a list of 150 candidate companies after reviewing companies’ revenues and net profits for 2013.

A separate survey was conducted to find the winners in 79 industrial sectors: 25 in manufacturing, 35 in services and 19 in public service businesses.

A total of 17 companies, including CJ Cheil Jedang (food), LG Chem (petrochemicals), Hanil Cement, GS25 (convenience stores) and SK Energy (oil refining), were selected as the most admired companies for 12 consecutive years in their business sectors. Dongwon Industries was named the winner in fisheries, a category included for the first time this year.

“Companies need to keep innovating and must be able to react to all kinds of changes happening in industries in order to ensure continuous growth,” said Song Kwang-ho, spokesman of the KMAC.