Older drivers pose a risk on the road

Older drivers pose a risk on the road 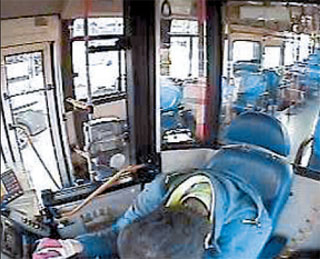 CCTV footage shows the driver of a bus in Changwon, South Gyeongsang, passed out at the wheel. Provided by Gyeongnam Provincial Police Agency

While making his way around town one recent afternoon last December, a local bus driver in Changwon, South Gyeongsang, bent his neck back after feeling slightly dizzy.

Shortly after, he collapsed forward, still holding on to the steering wheel. His bus ended up colliding with a one-ton truck and killed the other driver.

Fortunately no passengers were on the local bus that day, and its driver, surnamed Jeong, was not harmed in the accident. The scene was captured in footage from the black box equipped in the bus, and when police investigated the case, they found that the 38-year-old had previously been diagnosed with diabetes and had passed out when his blood sugar plummeted.

But Jeong’s story is only just part of a more disquieting trend in which an increasing number of drivers with accompanying health risks are causing accidents, according to data from the country’s traffic authority, underscoring the need to reinforce health examinations for such workers.

From 2011 to 2013, there were 21 accidents recorded that involved taxi or bus drivers diagnosed with low blood sugar, heart disease or at risk for stroke, according to the Road Traffic Authority.

Yet, with the absence of health-related regulations, most anyone may apply to be a public transport driver, even those with pre-existing health conditions. Currently, only those who have committed violent crimes or have had involvement in drug-possession cases are restricted from such jobs.

Experts say the existing health regulations for drivers would be as lax as a physical check-up, such as an eye exam, to acquire a general driver’s license.

Jeong, for instance, was hired after undergoing a simple physical exam.

Later, when he was diagnosed with diabetes during a regular health examination for public transport drivers, he was permitted to continue driving because he was young and had been prescribed medicine.

In response, the Korea Transportation Safety Authority required them go through a medical examination, though experts argue that examination standards are still too lenient and only really check a driver’s vision and hearing without investigating further.

“Driving a mass transport vehicle means the lives of passengers are collateralized,” said Kim Pil-su, a professor in the Department of Automotive Engineering at Daelim University College. “A concrete and reinforced recruitment standard, in terms of a medical exam, is needed for transport drivers.”