Shim Hyung-rae laughs off the past

Shim Hyung-rae laughs off the past 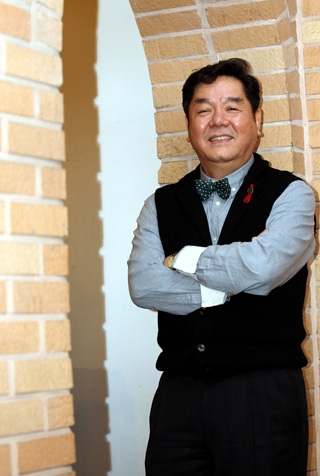 Shim Hyung-rae, the director of the 2007 blockbuster “D-War,” played it cool on Feb. 21, during an appearance on tvN’s “SNL Korea” as his prolific career became part of a running punch line.

In fact, the veteran entertainer seemed to enjoy it.

The show’s comedic jabs targeted “D-War,” a project in which he invested heavily, and the patriotic fervor of the movies he’s produced.

The program also made light of a lawsuit filed by Shim’s former employees, who accused the former comedian of failing to pay them millions of won worth of wages and severance pay.

Viewers seemed to love it, too. Ratings for the episode recorded 2.6 percent, according to Nielson Korea, which tvN said was the highest for season 6 of SNL Korea.

“It was my way of apologizing for all the mishaps in my life,” he said. “As a former comedian, I wanted to make my apology fun.”

Shim, who is now better known for his directing, rose to fame for his mastery of physical comedy, most recognized for his foolish character Yeonggu and was considered an A-lister in Korea’s comedic circles in the 1990s.

Q. How do you feel about your SNL appearance?

A. There are regrets. I worked hard to export Korean-made films overseas, but now that I look back on it, it wasn’t an easy task for a person like me. That’s why such unfortunate incidents happened, I think, and I have always been apologetic to my fans and the public for that reason.

[In 2011, Shim was sued by his former employees over wages and alleged fraud. His company later went bankrupt.]

I’m glad that some people found it fun.

SNL is a live late-night show. Wasn’t that difficult?

Doing slapstick on a live show wasn’t easy. If timing is off, even by 0.1 second, it’s not funny. In the old days, my partners - Lim Ha-ryong and Lee Bong-won - and I knew what one another were thinking just through eye contact. And I was concerned I might not have that connection with young comedians today. But the results were good, I think. After the show, a few students wanted to take photos with me. I was teary at the thought that there are people who remember Yeonggu.

Do you have any plans as a comedian?

Older people often ask me why I don’t appear [in comedy shows now]. I do think there are some who miss my comedic style. I’m not criticizing gag shows today, but I think there are some people that these shows just don’t appeal to. Comedy styles in my days made seniors, and even foreigners, laugh. It’s sad to see my former fellow comedians losing ground now. I’m seeking opportunities for all of us, and SNL gave me that courage.

How are preparations for “D-War 2” going?

I hope to start filming between May and June at the latest. I remember how I had to sell the first “D-War ” to China at a giveaway price. But I don’t think that will be the case with the D-War sequel.

The Chinese market has developed enormously since then. I was offered a good deal from China, Macau and Hong Kong, and we’re in the process of negotiating. The U.S. market is also highly interested in the “D-War” sequel. Companies I’m talking to - about investment, distribution and casting - include Open Road Films and Sony Pictures.