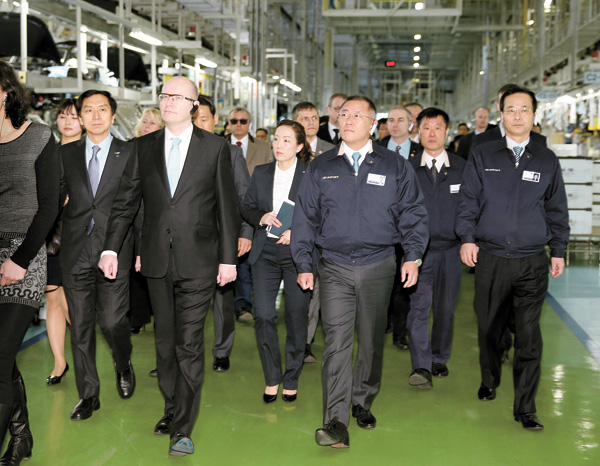 Bohuslav Sobotka, second from left, gets a tour around the main plant of Hyundai Motor in Ulsan, North Gyeongsang, on Friday, guided by Chung Eui-sun, vice chairman of the automaker. Provided by the company

Bohuslav Sobotka, prime minister of the Czech Republic, visited the main assembly plant of Hyundai Motor in Ulsan, North Gyeongsang, on Friday and met with Chung Eui-sun, vice chairman and heir apparent of the largest automaker in Korea.

About 40 government officials and businesspeople from the Czech Republic arrived in Ulsan early in the morning as part of their four-day state visit.

Chung greeted Sobotka at the main entrance of the plant’s public relations center.

Since Hyundai operates an assembly plant in the Czech Republic, the Korean automaker and Czech government have enjoyed favorable relations.

The Czech delegation had a 90-minute tour of the factory where Hyundai produces its premium Equus and Genesis sedans. The group also saw the shipment area where three 50,000-ton ships can come alongside the pier to load newly built automobiles for export.

The Ulsan plant is the largest automobile production site in the world, according to the company. The Czech prime minister expressed interest in the plant’s quality management system, the company said.

“I am impressed by the Ulsan factory’s world-class size,” the prime minister was quoted as saying by the company. “I learned here the secret of quality products made at Hyundai Motor’s plant in my country.”

“Hyundai Motor will try to help create jobs in the Czech Republic and contribute to developing the automobile industry of the country, being an exemplary model of bilateral economic cooperation,” said Chung.

Hyundai Motor established Hyundai Motor Manufacturing Czech with a production capacity of 300,000 vehicles a year in Nosovice, one of the three biggest cities in the Czech Republic, in 2008. The plant produces the i30, ix20 and Tucson ix.

As many as 94,166 units of the Tucson ix were sold last year in Europe, the best-selling Hyundai model in the region.

That helped raise the profitability of the Czech plant.

Hyundai Motor plans to start producing the new Tucson this year as part of the company’s strategy to ramp up sales in Europe.

Sobotka visited the Hyundai factory in Nosovice in March last year and expressed his gratitude to Hyundai for its contribution to the regional economy.

In the Czech market alone, the Korean automaker’s share reached 9.6 percent, making it the country’s second-biggest carmaker after Skoda.