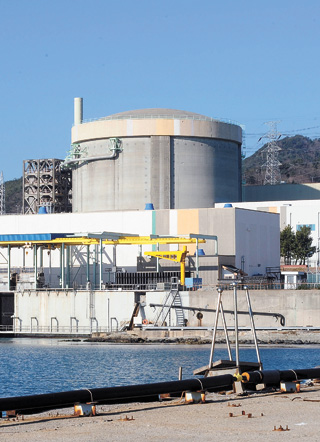 The lifespan of the Wolseong 1 reactor was extended Friday morning. [JoongAng Photo]

Korea’s second oldest nuclear power reactor will get a new lease on life and be operated through 2022, the atomic energy authority decided Friday.

The Nuclear Safety and Security Commission (NSSC) held a meeting Thursday and reviewed the possibility of extending the lifespan of the Wolseong 1 reactor, which was shut down in December 2012 at the completion of its original 30-year lifespan.

This week’s deliberation was the third discussion on the matter since last month, and the nine commissioners of the nuclear safety board, including its chairman, struggled for more than 15 hours to make the decision.

Around 1 a.m. Friday, Lee Un-chul, chairman and chief regulatory officer of the NSSC, held a vote to decide the fate of Wolseong 1. Of the nine commissioners, seven agreed to extend its lifespan by 10 years starting from 2012. Two commissioners who were appointed with the support of opposition parties walked out of the meeting before the vote, arguing they wanted more time for discussion.

According to the Korea Hydro and Nuclear Power Corporation, the nuclear reactor will be turned back on as early as April.

It was the second time that Korea decided to restart a nuclear power reactor that has completed its lifespan. Gori 1, the country’s oldest reactor, was turned back on in 2008 and will operate until it is 40 years old in 2017.

Friday’s decision still set a precedent because the decision on Gori 1 was made by the nuclear safety commission, which is headed by the minister of science and technology. Friday was the first time that the NSSC, formed by experts recommended by the government and the ruling and opposition parties, made a decision to extend the expired lifespan of a nuclear power plant.

The NSSC said the decision was made based on evaluations by experts including the state-run Korea Institute of Nuclear Safety. A stress test by an expert group also showed that the reactor was safe enough to operate for more years, it said.

The two commissioners appointed through the opposition parties, however, claimed that Wolseong 1 failed to meet the newest safeguard standards introduced by Canada, the builder of the reactor. Known as R-7, the standards were introduced after the catastrophic nuclear accident at the Chernobyl nuclear power plant in Ukraine in 1986. Those standards were used in the Wolseong 2, 3, and 4 reactors.

The commission’s other members, however, accepted the operator’s argument that old components of Wolseong 1 were all upgraded, so the reactor is safe for more years.

Before shutting down Wolseong 1, the KHNP invested 560 billion won ($510 million) to upgrade the plant by replacing parts and installing new safety features. The modifications were done by Canada’s Candu Energy.

After two years of surveying, the KINS informed the nuclear safety commission that the reactor was fit to operate for more years. “Many experts conducted evaluations for years,” said a commissioner who supported the extension of the lifespan. “Convincing answers were also presented on the concerns that were raised until now.”

Anti-extension activists and residents of Gyeongju, where Wolseong 1 is located, protested the commission’s decision. They said the independent experts who participated in the stress test of the reactor made 32 recommendations for safety improvements, and the nuclear reactor is not safe to be operated for more years.

The Wolseong 1 reactor, located in Gyeongju, North Gyeongsang, started operating in 1982 and has a capacity of 679,000 kilowatts. Its operations have been suspended since 2012 because it reached the end of its intended life span of 30 years.

In 2009, the KHNP applied for an operation extension.