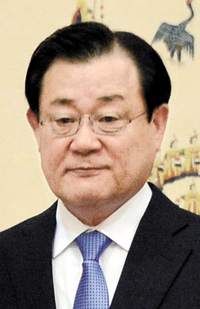 President Park Geun-hye named Lee Byung-kee, head of the nation’s main intelligence agency, as her chief of staff Friday, filling the top post of her secretariat after a 10-day vacancy.

Lee, 68, is a former diplomat currently serving as the director of the National Intelligence Service (NIS). Park nominated Lee Byong-ho, former deputy director of the Agency for National Security Planning, the predecessor of the NIS, to succeed Lee to head the spy agency.

More appointments to complete Park’s reorganization of the government were also announced. Park named Kim Sung-woo, a veteran journalist from the Seoul Broadcasting System who was serving as her special advisor for social and cultural affairs, as her new senior secretary for public affairs.

Friday’s appointments completed a reorganization of the Blue House that started earlier this month as Park started her third year in office. On Feb. 23, Park restructured her secretariat, replaced three senior secretaries and introduced a group of special advisors following criticism that she is isolated and out of touch with public sentiment.

At the time Park did not replace her heavily criticized Chief of Staff Kim Ki-choon, although she hinted at her intention to do so during a New Year’s news conference on Jan. 12. Although Kim submitted his resignation on Feb. 17, she left the chief of staff post vacant for 10 days.

“Lee Byung-kee is known for his expertise in international relations and inter-Korean relations,” said Blue House spokesman Min Kyung-wook, pointing to his multi-decade career in the public service. Lee passed the foreign service exam in 1974 and worked in various posts in the government. He served as senior secretary of protocol in the Roh Tae-woo Blue House from 1990 till 1993.

A native of Seoul, Lee studied international relations at Seoul National University. He also served as deputy director of the Agency for National Security Planning from 1996 till 1998.

It appeared that the president has chosen another close associate to lead the Blue House rather than finding a fresh face, as many urged. Lee’s ties with Park go back years, as did his predecessor’s.

After working as deputy head of the spy agency under the Kim Young-sam government, Lee became a visiting professor at Keio University in Japan and then a special advisor of political affairs for Lee Hoi-chang during his presidential campaign in 2002. In 2004, Lee became an associate of Park, who was then serving as chairwoman of the Grand National Party, the predecessor of the Saenuri Party, and supported her presidential ambitions.

During the party’s presidential primary 2007, Lee advised Park on foreign, security and political affairs as the deputy chief of her campaign. While Park failed to win the candidacy at the time, Lee remained as her supporter and contributed to her victory in the 2012 presidential election while serving as the advisor to the Saenuri Party’s think tank Youido Institute.

During her presidency, Park recruited him to key posts. From 2013 till 2014, Lee served as ambassador to Japan. In July 2014, Park appointed him as head of the NIS.

Lee Byong-ho, a 75-year-old professor at the University of Ulsan, was nominated as the new head of the NIS. He served in key posts in the spy agency for 26 years, and Park decided to appoint him for his expertise and experience, Blue House spokesman Min said.

“He also has insight into international relations as he served as a minister at the Korean Embassy in the United States and ambassador to Malaysia,” Min said.

“He is a man of integrity and strong patriotism and has earned deep trust from members of the intelligence agency. He is the best candidate to head the NIS.”

While Lee Byung-kee will immediately start work as presidential chief of staff, Lee Byong-ho needs to go through a confirmation hearing at the National Assembly.

Political observers said the nomination amounted to an internal promotion because Lee Byong-ho is not a politician and he is a veteran of the intelligence community.

While the ruling party praised Park’s latest appointments, particularly the choice of Lee Byung-kee as the new chief of staff, the main opposition party condemned the decision.

“Lee has good understanding of the president and the Blue house and it was putting the right man in the right place,” said Rep. Kwon Eun-hee, spokeswoman of the Saenuri Party. “We expect him to manage the presidential office with stability rather than reigning over the staffers.”

“Naming the head of an intelligence agency, who works in the shadows, to serve as the chief of staff of the Blue House, the center of state affairs, is just unprecedentedly wrong,” said Rep. Kim Yung-rok, senior spokesman of the party. “It’s a rejection of the people’s demand for a change in the direction of state affairs through reform. The appointment was like a revolving door.”

“It was a matter of recruiting a reformist or relying on a comfortable confidant,” said Rep. Park Wan-ju, another NPAD spokesman. “But the president decided to use the NIS head as her chief of staff, going against the people’s wish for better communication and reform. This is extremely disappointing.”