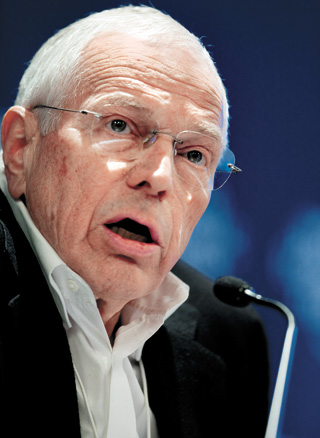 In terms of innovation, the United States has “gone down” in the past 30 to 40 years, says Edmund Phelps, winner of the 2006 Nobel Prize in Economic Sciences and chair professor at Columbia University.

In a conversation with SaKong Il, chairman of the Institute of Global Economics of Korea and adviser to the JoongAng Ilbo, held at the Center on Capitalism and Society of Columbia University, Phelps said now is the time for the global economy to pay attention to China’s innovation capability.

To mark its 50th anniversary, the JoongAng Ilbo will run five in-depth interviews with renowned economists about solutions to emerge from the current global slowdown.

“I see that a number of Chinese leaders including Premier Li see widespread innovation as a way forward,” he said. “To the extent that he can get his way on that, that could be enormously beneficial for China within four or five years. A number of companies there like Alibaba and Tencent are creating platforms that make it easier for people to do business. I think it might be surprising the progress that China will make in that direction over the next few years.”

Phelps is known for his proposal of mass entrepreneurship for China. Li happily accepted the Nobel laureate’s advice, leading to the country’s current start-up craze. Li even asked Phelps to sit in the front row during his speech at the World Economic Forum in Davos, Switzerland.

The economist doesn’t view problems resulting from China’s excessive investment as a negative, saying empty buildings won’t be of significant consequence. He also dismissed the possibility of a hard landing for the Chinese economy.

On the other hand, Phelps sees the euro zone as the biggest uncertainty in the global economy, saying “Greece unable to repay debt is a textbook case of a bad economy.” He called for an agreement on Greece among the European Union, European Central Bank (ECB) and International Monetary Fund (IMF).

SaKong Il, chairman of the Institute of Global Economics and adviser to the JoongAng Ilbo, left, and Edmund Phelps discuss the global economy at the Center on Capitalism and Society in New York. Photo by Ahn Jeong-gyu

Following are excerpts from the conversation with SaKong.

Q. How do you view the world economy in both the short and long term?

A. It’s certainly a difficult time. The world’s situation is extremely complex. I would note that most parts of the global economy are much better than they were 10 or 20 years ago. From that perspective, things are not so bad. We are just worried about the possibility of things getting a lot worse. It seems to me that Asia has done extremely well. Its near-term prospects may be clouded by a number of problems, but we can reasonably hope Asia will continue to do pretty well. It’s Europe I’m worried about. Of course, the Russian situation has made that worse. And the Middle East situation has made it worse, too. It’s kind of a relief to see that the American economy has done pretty well the past four or five years. It has managed to climb out of its hole very well, as has the United Kingdom. It’s interesting that the main two sources of the financial crisis, London and New York, are in the countries that performed the best in getting out of it. Some of the European countries that were so remote from the financial crisis are now struggling to get back to a normal level of economic activity.

It’s like a blessing in disguise. You said you are concerned about Europe because of political affairs there. You used to point out on many different occasions that the fundamental problem of continental Europe is corporatism. Do you still see that and can you explain the current economic crisis by corporatism?

I don’t think corporatism produced Europe’s crisis in 2008 and 2009. I think it was the Americans and British that produced the crisis. But, of course, I do believe characteristic European policies, where corporative policy is, made the European economies particularly vulnerable to the financial crisis. The banks were persuaded by governments to load up on all kinds of debt that was extremely risky, including government debt. Some governments ran dangerous fiscal policies. It was not surprising that when the crisis came, those economies that had been so reckless in allocating investment funds, savings and so forth - Greece, Spain, Italy - were hit hard by the crisis.

An intense debate is underway about Greece. While Greece demands additional debt write-offs, the EU, ECB and IMF, the country’s three creditors, reject the demand. It’s interesting that President Barack Obama sided with Greece. How do you see this debate? You earlier seemed to understand the Greek situation.

With regard to the debt problem of Greece, I certainly understand it is necessary for creditors to negotiate and strike a deal. The Greeks simply say that with a president type of economy they are not able to pay back all that money. That’s one thing. But of course, I wouldn’t like to see the Greek government swing back into large fiscal deficits, because in a few months or years the capital market might be willing to buy government debt. I hate to see that. Like everybody else I would like to see Greece undertake serious changes in its economy. I don’t think we exactly know what the Greek government is wiling to do in the way of making changes. They talk about throwing the oligarchs out, which would make it difficult to run some industries if you discard the people who know how to upgrade them. In the short run, it’s a bit of a problem. Greece has an economy that is extremely sporadic, rigid, very unfriendly to start-ups, and full of social protections and cronyism. It’s almost a textbook case of a bad economy. It’s bad in the most corporatist way. So I think that I would like to see the government make progress in that direction. It seems to me that doesn’t require going back to fiscal deficits. They are running a primary surplus now. Maybe debt could be cut down a little bit. It’s not a time for going back to fiscal deficits.

Well-known economists say that creditors, as well as debtors, share some of the responsibility for the problem and they should share the burden. What do you think?

That seems absolutely right to me. I think Germany was an egregious case because I think that a lot of the lending from Germany was for German business activities, including construction companies and German banks. So Germany was not just acting as a humanitarian, but pursuing its business interests for a long time by giving a lot of credit to Greece. Germany certainly bears responsibility for that. What I would like to see Germany and Greece do are to take some steps toward introducing more competition into the Greek economy and a greater scope for individual initiative and creativity, making it easier for people to start firms and lay off employees when that’s appropriate. There are lots of things the Greek government could do that would not cause an earthquake in society and be a good investment for the medium-term and future.

Let’s switch the subject to China. I know you frequently travel to China. You were recently given the Friendship Award. Premier Li promoted the idea of mass entrepreneurship that you proposed for China. How do you see China? There is some pessimism about China because of issues such shadow banking, overinvestment and debate about a hard-landing for the economy.

It’s true that some banks may have loans for those vacant buildings, and now those loans probably won’t be repaid. But the Chinese banks, I understand, are doing all right. For the most part, they are not in a serious situation. And I don’t think China is headed for some sort of crisis. So that’s good. In the past, we wouldn’t have believed China could double its gross domestic product many times, virtually end starvation and make everybody well-fed, and create fantastic cities. We all underestimated the Chinese.

We forgot their prominence hundreds of years ago. Now it’s said that while the Chinese are fantastically jealous and sharp as entrepreneurs, they are not going to do so well as innovators. Until recently, they are too much like copycats, adaptors and responders, and not very good at imagining and sensing areas that might be right for creating new products. In America, aggregate innovation seems to have gone down, not up, in the past 30 to 40 years. Compared to America, I am pretty hopeful about China. Maybe it’s China’s turn now. Chinese people love to do business. I think China can easily beat Europe. Europe hasn’t done any innovation lately. The results of one of my surveys show that innovation has contributed to raising Chinese GDP by 1 percentage point a year.

Now we need to change the subject to Korea. You said Park Sung-yong, former honorary chairman of Kumho Group, was one of your students. How do you see Korean chaebol?

I don’t know the details and I am struck by the capabilities inside Samsung. But I wonder about business judgment. You should have good business judgment if there is going to be innovation. The contrast between Samsung and Apple is that Samsung has done a number of things wrong, while Apple always did things right. But, certainly, the economy of Korea is a success story. But if I use baseball terminology, it’s still in the first inning of the game. We don’t know how that is going to turn out. The education level is normally good in Korea and that is a great success.