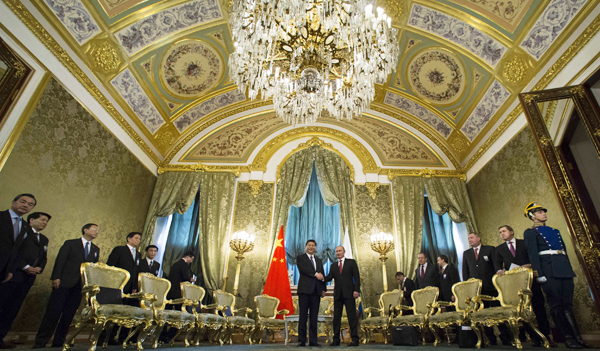 Russian President Vladimir Putin, right, and Chinese President Xi Jinping shake hands during their meeting in the Grand Kremlin Palace in Moscow, in 2013. Russia is Xi Jinping’s first foreign destination as China’s president. Xi’s talks with Putin are set to focus on oil and gas as China seeks to secure new energy resources to fuel its growing economy. [AP/NEWSIS]

HOUSTON — Russia watchers are rightly focusing on the latest brittle ceasefire in Ukraine, seeking to discern President Vladimir Putin’s intentions there. But they would be wise not to overlook another unfolding struggle — one that will have profound long-term consequences
for Europe and for Putin’s ability to exert pressure on the continent.

Last December, Russian’s giant gas firm, Gazprom, and a Turkish pipeline company signed a memorandum of understanding to construct a pipeline from Russia to Turkey under the Black Sea. This new “Turkish Stream” is an alternative to the “South Stream” Black Sea pipeline
from Russia to Bulgaria — a project that the Kremlin abandoned in December, in response to the sanctions imposed by the European Union after Russia’s invasion of Ukraine and annexation of Crimea.

The South Stream project failed to comply with EU competition and energy directives, and the announcement of the $12 billion Turkish Stream is likely to reinforce Russia’s reputation as an unreliable partner, thus accelerating Europe’s search for alternate supply sources. Indeed, in risking his most lucrative market, Putin is exhibiting an almost suicidal disregard for the Russian economy — apparently
for no other reason than to cement enmity with Ukraine.

The Kremlin intends to remove Ukraine from a gas-delivery system that has been in place since the 1980s, routing supplies instead through a new and untried network to a market that may not even exist. Last month, Gazprom announced its intention to cease shipments through Ukraine when the contracts with the country’s gas pipeline company, Naftogaz, expire in 2019. Gas from the Turkish Stream will be livered to the Greek border on a take-it-or-leave-it basis. Gazprom expects permission to carry out design and survey work “soon,” with its first delivery to Turkey to arrive in 2017.

Gazprom’s erratic behavior is not a matter of minor concern for Europe. The continent relies on Russia for some 30% of its natural gas, 80% of which is transported through Ukraine. And the continent has been left out in the cold once before. In January 2009, Gazprom ordered cutbacks of deliveries through Ukraine, causing severe shortages in six countries in eastern and southeastern Europe.

In late 2014, Russia cut off Ukraine completely, again signaling its readiness to use gas supplies as a weapon of foreign policy. The EU rushed in to broker a settlement that some contend was against Ukraine’s interests.

But, contrary to what Putin seems to believe, neither Europe nor Ukraine is likely to be the biggest loser in Russia’s effort to redirect its gas exports. Gazprom receives two-thirds of its hard-currency revenues from Europe, and a period of falling exports and domestic economic crisis is not the ideal time to play games with your best customer.

Indeed, the European market is already slipping away. Gazprom’s European sales plummeted in the third quarter of last year and fell by 25% in the fourth quarter. The slump in demand is coming at a time when Russia is desperate for hard currency, owing to sanctions that exclude it from credit markets. Its major companies are facing huge debt refinancing needs, its currency reserves are collapsing, its economy is heading toward a deep recession, and the ruble is plumbing new lows.

In redirecting its exports, Russia is in effect demanding that Europe spend billions of euros on new infrastructure to replace a perfectly good pipeline, only to satisfy Putin’s desire to cause trouble in Ukraine. In January, Gazprom’s CEO, Alexey Miller, imperiously brushed off
European concerns, stating, “We have informed our European partners, and now it is up to them to put in place the necessary infrastructure starting from the Turkish-Greek border.”

The initial reaction in Europe was that Putin either was bluffing or had taken leave of his senses. “The decision makes no economic sense,” was how Maros Sefcovic, the European Commission’s vice president for energy union, put it. “We’re good customers. We’re paying a lot of money. We’re paying on time, and we’re paying in hard currency. So I think we should be treated accordingly.”

Putin’s erratic and economically oblivious policies are frittering away the last remnants of what was once Gazprom’s monopoly position in the European gas market. Clearly, if Europe is to spend billions on pipelines, it would be better off doing so as part of an effort to diversify its sources of natural gas, rather than deepen its dependence on Russia. After all, memories are long, especially when it comes to
frigid winters of unheated homes and closed factories.

When one of Joseph Stalin’s chief planners was asked why he was willing to defend a series of ludicrous proposals, he famously replied, “I’d rather stand for unrealistic plans than sit [in jail] for realistic ones.” One can imagine that Gazprom officials are thinking along the same lines.

If so, they should start thinking differently. Russia cannot afford more economic pain and suffering. But that is what it will get unless sober heads prevail.