On history, U.S. official seems to side with Japan

On history, U.S. official seems to side with Japan 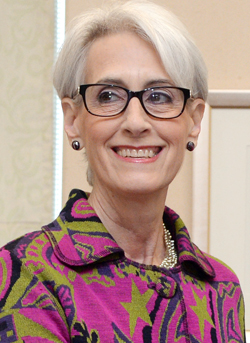 A senior U.S. official has issued a rare criticism toward Korean and Chinese leaders’ approach toward Japan, stirring up controversy here amid growing concerns over Tokyo’s increasingly assertive defense policy and continued efforts to whitewash its military past.

Wendy Sherman, undersecretary for political affairs in the U.S. State Department, said it is easy for a leader to “earn cheap applause” by reproaching a former foe, but such “provocations” only paralyze regional affairs.

Her remarks prompted a serious response from Seoul on Monday. South Korea’s vice foreign minister, Cho Tae-yong, said the Foreign Ministry is not taking Sherman’s statement lightly and has asked Washington to clarify its stance.

Although Sherman did not directly identify South Korean President Park Geun-hye or Chinese President Xi Jinping in her speech, her remarks appeared to refer to them.

Her address, made Friday at the Carnegie Endowment for International Peace in Washington, came shortly before President Park issued yet another call for Japan to face its wartime past.

After defending Prime Minister Shinzo Abe’s latest move to rewrite Japan’s pacifist constitution in order to lift the self-imposed ban on collective self-defense, Sherman said that the move could be considered a challenge for Northeast Asia.

“To what extent does the past limit future possibilities for cooperation?” she said. “The conventional answer to that question, sadly, is a lot.

“The Koreans and especially the Chinese are sensitive to any change in Japanese defense policy. The Koreans and Chinese have quarreled with Tokyo over so-called comfort women from World War II. There are disagreements about the content of history books and even the names given to various bodies of water,” she said, referring in part to the thousands of mostly young Korean women and girls who were forcibly recruited into Japanese military brothels during the war.

“All this is understandable, but it can also be frustrating,” Sherman continued. “Any architect who set out today to design a platform for international security, prosperity, and peace would love to include in her blueprint a harmonious and cooperative East Asia.

“There can be no question that the world would be safer, richer and more stable if the United States, Japan, China and South Korea were consistently pulling in the same direction, and that’s definitely what the majority of the people in the region want.

“Of course, nationalist feelings can still be exploited, and it’s not hard for a political leader anywhere to earn cheap applause by vilifying a former enemy. But such provocations produce paralysis, not progress,” Sherman said. “To move ahead, we have to see beyond what was to envision what might be. And in thinking about the possibilities, we don’t have to look far for a cautionary tale of a country that has allowed itself to be trapped by its own history.”

Sherman is the fourth highest official in the U.S. State Department, appointed to the position in 2011. During the Clinton administration, she served as special adviser to the president and as a policy coordinator on North Korea.

Her remarks were made shortly before President Park delivered her speech commemorating Korea’s independence movement in 1919 against Japanese colonial rule, which lasted from 1910 to 1945.

It also came as Abe’s panel of experts met for the first time last week to discuss what he should address in a statement marking the 70th anniversary of the end of World War II.

It is anticipated that Abe will water down his predecessors’ apologies over Japan’s wartime history, including the landmark 1995 Murayama Statement, which was issued by Tomiichi Murayama, the Japanese prime minister at the time. In the Murayama Statement, Japan for the first time acknowledged its colonization and aggression in Asia.

Abe had earlier hinted at his intention to revise the Murayama Statement, triggering criticism from Korea and China. He now says he wants to issue a more forward-looking statement.

Korean politicians were enraged by Sherman’s remarks, while the Ministry of Foreign Affairs attempted to smooth out the situation.

“The ministry does not take Undersecretary Sherman’s remarks lightly,” Vice Foreign Minister Cho on Monday said before the National Assembly’s Foreign Affairs and Unification Committee. “We have asked the U.S. government, through diplomatic channels, if it has changed its position toward historical issues [in Northeast Asia]. Over the weekend, we confirmed that there was no change.”

Cho added, however, that Seoul still sees Sherman’s remarks as problematic, even though Washington’s stance remains unchanged: “To verify the U.S. government’s position more specifically, Seoul and Washington will have additional talks this week.”

“There is no need to overly interpret her remarks, but it’s not something we can treat lightly,” Saenuri Party Rep. Na Kyung-won, the newly elected chairwoman of the Foreign Affairs and Unification Committee, said during an early morning interview with CBS radio. “Japan has recently exhibited very aggressive diplomacy toward the United States on the history issue, and some say that this lobbying is now having an effect. ... I believe we should not say that Washington’s stance was changed fundamentally [to only side with Japan].”