Is Chinese QE next?

Is Chinese QE next? 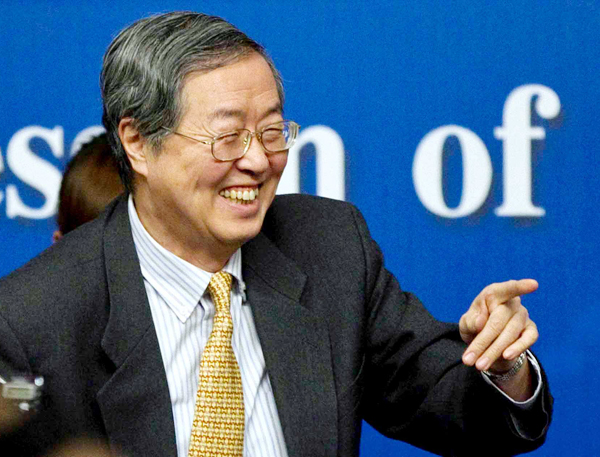 For China’s Central Bank Gov. Zhou Xiaochuan, it may be time to focus more on quantitative easing rather than on “qualitative easing” as the national and regional governments are under pressure to ramp up stimulus efforts. [AP/NEWSIS]

Over the weekend, China’s second rate move in three months made clear how concerned leaders in Beijing are about sliding growth. And Saturday’s quarter percentage-point cut is probably only the beginning. As data on manufacturing, property and consumer prices take a dramatic turn toward contraction, there’s every reason to think China’s one-year deposit and lending rates — now 2.5 percent and 5.35 percent — could head toward zero, just as in neighboring Japan. After that, can quantitative easing with Chinese characteristics be far off?

“QE would be one alternative,” says economist Louis Kuijs of Royal Bank of Scotland in Hong Kong.

As Kuijs points out, the PBOC has “already taken some small-scale QE-type measures last year in the form of direct lending.” It’s used short-term lending facilities to cash up China Development Bank so that the nation’s so-called superbank could support local governments
and their countless infrastructure vehicles. So far, though, the PBOC has done more “qualitative easing” than QE. This phrase, widely attributed to Citigroup Chief Economist Willem Buiter, refers to how the PBOC is more concerned with the composition of its balance sheet than the size.

It may be time to focus more on the latter. As downside risks accelerate, the national and regional governments are under pressure to ramp up stimulus efforts. That will exacerbate the ticking time bomb that is local government debt. While good numbers are notoriously hard to come by, local authorities’ borrowings may have already reached $4 trillion, bigger than Germany’s economy, says Mizuho Securities Asia. Regional financing schemes are increasing the opacity of China’s already murky debt profile — and with diminishing returns. Thanks to overlapping levels of overcapacity, new borrowing will only put a floor under things, not power a sizable acceleration in gross domestic product. As Bank of Japan Gov. Haruhiko Kuroda has shown, supporting growth in a heavily indebted economy is better left to monetary policy.

By radically increasing China’s domestic liquidity, PBOC Gov. Zhou Xiaochuan would stabilize China’s price environment without adding to national debt. With both consumer and producer prices falling to a five-year low in January, China’s lending environment is becoming
more restrictive, says economist Wang Tao of UBS in Hong Kong. Even after the PBOC’s November rate cut, she says, real rates have moved up by 100 basis points since the fourth quarter. That, Wang says, “means a tightening of monetary conditions, which stands in sharp contrast with softening real activity.” By deploying its own monetary bazooka, the central bank could support growth and ease pressure on borrowers, untold numbers of which could be nearing default.

Zhou might also want to consider another of Kuroda’s unspoken innovations — the stealthy nationalization of debt. This may seem like an odd suggestion: The BOJ is an independent central bank overseeing the economy of a democracy, while the PBOC is an arm of China’s Communist Party. But Kuroda has blurred the lines considerably as he buys up more and more debt and does, what, with those bonds? Only his inner circle knows whether the IOUs the BOJ is hoarding are being stuffed into file cabinets or burned.

Zhou might consider similarly drastic measures in China, directly assuming more of China’s fast-growing debt problems. Why not begin pulling large blocks of potentially-distressed assets onto its balance sheet? It could start with the most fragile of local governments and their offbalance- sheet lending facilities. A major reason President Xi Jinping is so reluctant to let growth fall below 7 percent is fear
of defaults on municipal debt, which might set off a chain reaction in markets. Zhou can counter that threat by assuming debts, thus giving Beijing greater confidence to tolerate slower growth and to retool the economy.

The government should augment the process by creating a U.S.-style Resolution Trust Corporation to handle bad loans. But the PBOC can begin the deleveraging now, while also attacking deflation. There are plenty of risks, including a run on the yuan and the chance that
too much liquidity will fuel new asset bubbles. Still, anything Zhou can do to give Xi breathing space to pull off one of history’s biggest and riskiest debt restructurings will leave the global economy better off.

Chinese leaders generally have little interest in taking advice from Japan, particularly on the economy. In this particular case, though, they could do a lot worse than to follow Kuroda’s lead.