The train is leaving

The train is leaving 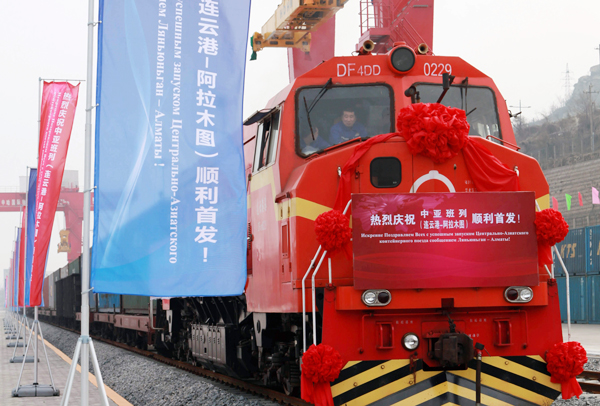 The first train carrying containers pulls out of a logistics terminal jointly built by China and Kazakhstan in Lianyungang in China’s eastern Jiangsu Province on Feb. 25. The railway line, linking Lianyungang and Almaty, will be a new route for goods to and from central Asia and a part of the construction of the Silk Road Economic Belt. [XINHUA/NEWSIS]

At China’s eastern port city of Lianyuangang in Jiangsu Province last month, officials gathered to open a new railway freight system that goes as far as Almaty in Kazakhstan. After it was opened, a train carrying 106 containers set off. The train passes through Xian and Urumqi and crosses the border to arrive at its final destination of Almaty 12 days later. Lianyuangang opened China’s 21st version of the ancient Silk Road.

An international seminar held last month in Quanzhou, Fujian Province, invited 220 experts from 20 countries. Participants from Myanmar, Sri Lanka, Oman and as far as Italy discussed the theme of China’s ambitious “One Belt, One Road” initiative, a path connecting Asia and Europe through one great economic belt across Central Asia and a sea route across the Indian and Arabic waters to Africa. Quanzhou officials heralded their city’s history as terminus of the ancient Silk Road and predicted it would play a similar role in the 21st century for
the “One Belt, One Road” initiative.

China is swept up in a fervor to resurrect the old Silk Road and revive China’s historical role of being at the center of the world stage. The fervor began after Chinese President Xi Jinping set a mighty goal to connect China to Europe by land and to Africa by sea. Local vernments are in a race to incorporate themselves in the project and are touting their qualifications to be part of the new Silk Road. Considering their excitement, every Chinese city could be connected to the new Silk Road. The project will be at the top of the agenda at the National People’s Congress when it convenes for its annual meeting this week.

Local governments have been busy with their pitches in order to secure massive funding from Beijing. The central government is examining a map of the world to decide on where to build roads, express railways, and communication infrastructure. The government is hoping to reverse the slowing of China’s domestic economic growth with the new Silk Road.

The financial means have already been arranged. It has created a Silk Road Fund of $40 billion and put up $50 billion to found a regional development bank, the Asian Infrastructure Investment Bank. Beijing wants Seoul to join the bank, but Seoul cannot decide.

Seoul must tread carefully in order not to irk Washington, which is obsessively sensitive about China’s unstoppable rise. Experts view the “One Belt, One Road” project as a mighty response to the U.S.-led Trans-Pacific Partnership, a free trade and investment arrangement
dubbed the “Everyone but China” deal. “One Belt, One Road” will encompass 4.4 billion people in 60 countries. Those countries do not include the United States. It is literally “Everyone but America.”

is literally “Everyone but America.” If we are too bound to our alliance with the United States, we could lose economic opportunities. Lee Sun-jin, a Sogang University professor and former ambassador to Indonesia, observed that no Western reasoning can prevail over China’s offer to help neighboring countries prosper through economic cooperation and aid. Countries are voluntarily jumping on the bandwagon of China’s all-encompassing economic vision. The AIIB has already lined up 27 members. The Philippines and Indonesia, traditional U.S. allies, joined despite pressure from Washington.

The Middle East and Southeast Asia, which are included in “One Belt, One Road,” are South Korea’s biggest construction markets. When the region is open for reconstruction and renovation thanks to Chinese funding, we could experience another construction boom.
China plans to build an expressway cutting through Laos, Thailand, Malaysia and through to Singapore. We can participate in the construction of local branch lines and infrastructure around train stops.

Daewoo International’s oil project in Myanmar is a success story. The company has sold 450 billion won ($409.9 million) worth of gasoline to China from the oil field. Myanmar is central to China’s new Silk Road. Pipelines that could connect to the Indian Ocean are under construction. We can enjoy a jackpot if we could sell oil through the pipeline. The Middle East could also offer similar opportunities. We must approach China’s Silk Road project purely from a business perspective. Joining of AIIB should be the starting point.

*The author is director of the JoongAng Ilbo China Institute.