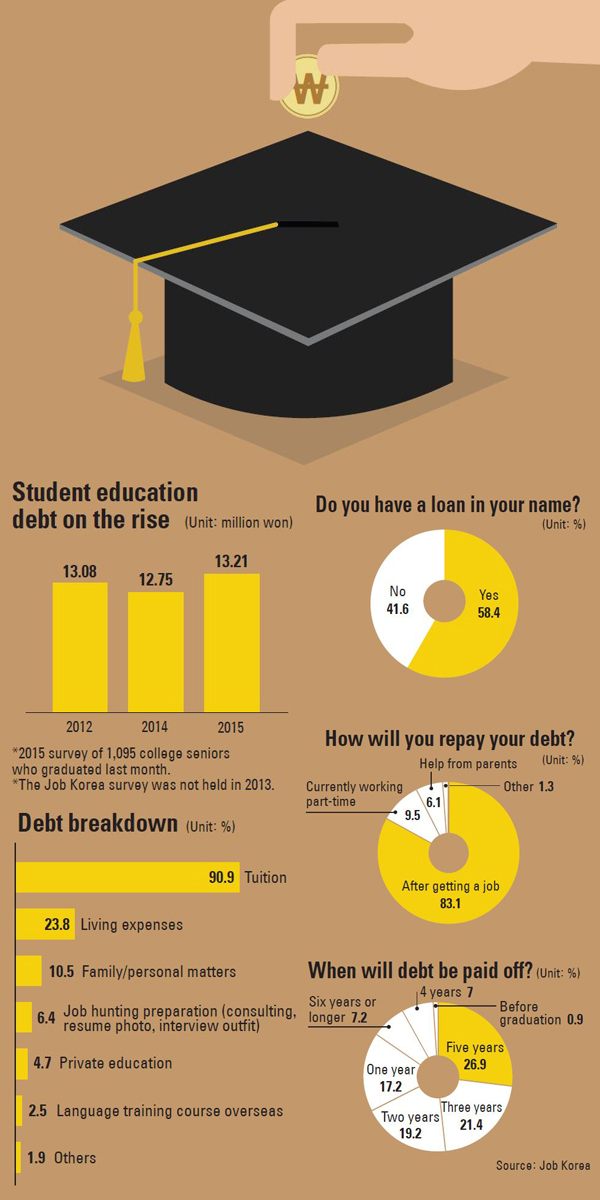 Three in five recent college graduates say they leave school with an average debt of 13.2 million won ($12,025), according to a survey by online recruitment portal Job Korea released Wednesday.

More than half of the 1,095 graduates surveyed reported they took out their first loans for tuition as freshmen.

In addition to the high percentage of the student population in debt because of tuition, many students and recent graduates are pushed to turn to loan programs at private lenders like savings bank with double-digit interest rates.

Seventy-seven percent of new graduates say they borrowed money from financial institutions in both the public and private sectors, with almost 3.4 percent reporting they resorted to high-interest small private lenders.

Currently, local tuition loan regulations classify people who fail to make payments on their debt for more than six months as credit delinquents, effectively preventing them from borrowing additional money from financial institutions.

This often pushes students to turn to nonfinancial institutions like savings banks and high-interest loan sharks.

The state-run Korea Student Aid Foundation, the main public tuition lender, said that in the second half of last year there were 1.5 million students with a cumulative total of 10.7 trillion won in outstanding loans. The average debt for each student was 7 million won last year, up from 5.25 million won in 2010.

However, only 68.3 percent of borrowers could afford to start paying back after getting full-time jobs that pay at least the national minimum living expenses of 1.5 million won a month. This means the remaining students - about a third of graduates with college debt - haven’t started repaying their loans and likely haven’t found jobs.

Analysts say Korea should put an end to the vicious cycle of students facing mounting debt and being forced to keep borrowing in order to continue their education by creating decent-paying jobs and reducing the youth unemployment rate.

“In tough economic times, the salary level gap widens depending on your educational attainment,” Cho Young-moo, senior researcher at LG Economic Research Institute, wrote in a report. “This almost forces young people to finish their university education even with debt.”

According to data Cho compiled from Statistics Korea, the salary gap between high school and college graduates was about 2 million won annually in the early 2000s.