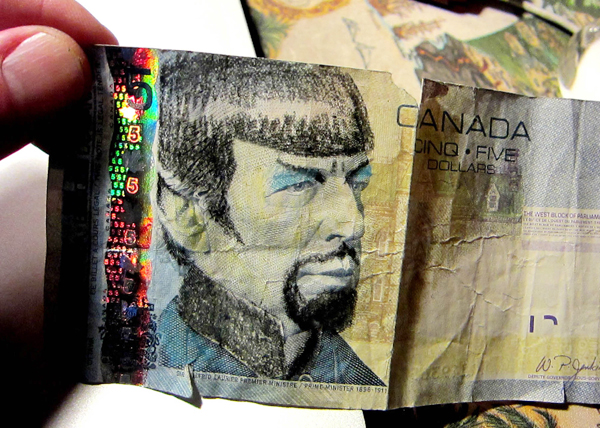 In this Friday, Feb. 27, 2015 photo, a likeness of actor Leonard Nimoy is drawn on a five-dollar Canadian bill in Calgary. [AP/NEWSIS]

Canada’s central bank said this week it’s not illegal to deface or even mutilate banknotes, although there are laws that prohibit reproducing a current bill electronically.

Nonetheless, bank spokeswoman Josianne Menard said Tuesday that scribbling on bills is inappropriate because it defaces a Canadian symbol and source of national pride. Menard said defaced bills may not circulate for as long and risk being rejected by retailers. ``There are important reasons why it should not be done,’’ she said in an email.

“Spock your $5 bills for Leonard Nimoy,’’ a group called the Canadian Design Resource tweeted alongside its depiction.

Images of the altered bills circulated widely online and attracted international media attention to something many Canadians had never seen before, although for others, it was hardly a new frontier.

Calgary artist Tom Bagley, who posted his own Spock-Laurier hybrid on Facebook and Flickr after Nimoy’s death, described it as an old bar trick to impress the waitress.

“I always thought it was OK as long as the numbers were intact, it still counted as money,’’ he said. “That’s what I heard. Because stuff happens, like say you spill spaghetti sauce all over it or something like that.’’