‘Socialphobia’ taps into dark side of Internet

‘Socialphobia’ taps into dark side of Internet 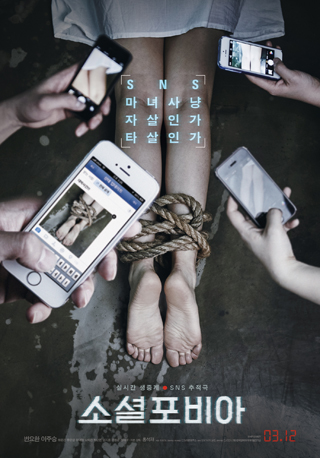 “Socialphobia” reveals the dark side of modern Internet culture for Korea’s youth. Provided by the distributor

Two members of the opposite sex get into a quarrel on social media. They get so angry at each other that they decide to meet up in reality. Other online spectators are on the male’s side, and a dozen of them join up to break into the female’s house.

And bam! The woman dies, apparently from suicide.

It sounds like a plot plausible only in fiction, but in Korea, where serious online bullying has been taking place for at least a decade, it would not be too far-fetched to presume that this could happen in the near future.

In the upcoming movie “Socialphobia,” in which the aforementioned plot takes center stage, the severity of online culture, especially among Korea’s Internet-obsessed teens, is bluntly revealed.

“People in our generation have experienced the evolution from PCs to Internet and social networking services,” said director Hong Seok-jae during a press conference on Feb. 27 at Wangsimni CGV in central Seoul. “I wanted to disclose the type of people who newly emerged from these shifts,”

“I took a motif from a similar incident in 2008 when one female wrote negative reviews of an athlete who participated in the Beijing Olympics. People who were furious about her comment gathered at a PC room near her house after hacking her personal information,” said the 32-year-old filmmaker. “They didn’t actually enter her house, thankfully, but I wondered what would have happened if they did.”

The movie starts with a female mocking a soldier who killed himself on duty on Twitter, which is followed by immense uproar from male users, including ordinary students such as Ji-woong and Yong-min, who are preparing to become police officers.

Blue-chip actor Byuen Yo-han, who recently rose to stardom through the tvN drama “Misaeng,” plays Ji-woong, a good-natured young man who inadvertently becomes involved in the controversy. Lee Ju-seung takes on the role of Yong-min, who notices something strange about the girl’s suicide and decides to get to the bottom of it.

Some popular elements of Korea’s online youth culture are detailed in the film, such as Internet broadcasting, where individuals set up their own channel and film themselves using a webcam.

In the movie this type of channel is used to live broadcast the amateurs solving the mysterious case.

Hong boldly and befittingly fills the screen with a black chat window that shows aggressive comments appearing one after another, delivering the plot quickly and efficiently.

“I wanted to visualize the web world as much as possible,” explained Hong.

“I wanted to make the audience feel as if they were being placed in front of their monitors. I was aware that it could seem text-heavy, but I didn’t care if [the comments] were readable or not because we don’t read all the words and sentences appearing on the monitor, either.”

Actor Byeun said that his character’s mundane side appealed to him.

“A police officer wannabe is actually an average Joe in Korea. The fact that he gets embroiled in such an incident drew my attention,” he explained.

The 30-year-old Byeun also said that he started using social media after shooting the film.

“I think in terms of communicating perspective, social media can be a good thing. But I am aware of the dangers so I am taking it slow,” he said.

The film received the Network for the Promotion of Asian Cinema award at the 19th Busan International Film Festival last year, where it had its world premiere.

The movie opens in theaters nationwide on March 12.