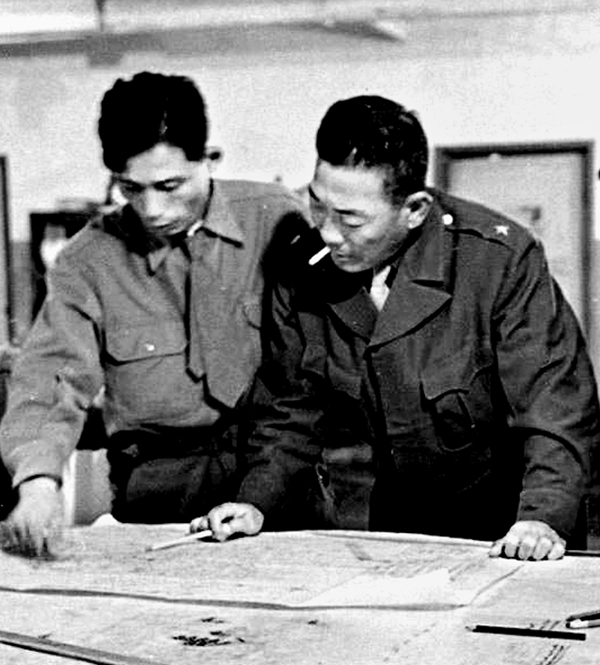 A 37-year-old Park Chung Hee, left, consults with then-Commander Song Ho-sung of the South Korean Army in October 1948 during a meeting in Gwangju to quell an uprising by local soldiers. Soon after Park moved back to Seoul, he was accused of being a Communist and faced the prospect of death row. Photo printed in the now-defunct LIFE magazine

On the dawn of June 25, 1950, North Korea founder Kim Il Sung launched a surprise full-scale invasion of the South. I was a first-lieutenant assigned to the Army’s intelligence bureau leading a team dedicated to monitoring the North Korean military. In the days leading up to the invasion, the movements of the North Korean Army along the border appeared abnormal, which concerned me. On June 24, I volunteered for a night shift.

I witnessed the beginning of that three-year war with my eyes wide open.

It was a war we had been utterly unprepared for. To be more specific, the military’s leadership made a damning misjudgment. The Army’s intelligence bureau actually foresaw the imminent attack from its analysis of the North Korean arm and reported it to the top command. But the government and military officials made no use of it and even distrusted it.

We were attacked by an enemy that we had already figured was coming to our doorstep sooner or later.

Two days after the invasion, tanks from the North Korean Army appeared north of Seoul, and things became more urgent minute by minute.

At dawn on June 28, I got out of an underground bunker where I had spent the last two days analyzing the enemy’s war plan.

Most of the military personnel except for only a handful of commissioned officers already fled its headquarters in the capital down to Suwon. I drove a GMC truck with some of my fellow military academy graduates. At around 2:30 a.m., we approached the Hangang Bridge to cross it. When we were about 200 meters away from it, a huge explosion tore apart the bridge, killing civilians who were trying to cross the river en masse to escape the city, which was at the mercy of the North Koreans. It was the South Korean military that bombed the bridge in a bid to delay the progress of invasion.

Seconds after the explosion, pieces of human flesh and blood hit my face. It was only a matter of minutes in which all of us on the truck could have been killed.

We deserted the vehicle and walked down to the dock and got on a row boat to cross the river. After crossing, we walked for hours to get down to Suwon where the Army set up its makeshift headquarters.

In the first days of the war, most military officials were asking how fast the North Koreans could cross the Han River to go further south.

As I moved my way toward Suwon on foot, I wondered if Park Chung Hee would return to the Army from his hometown in South Gyeongsang to join the fight against the North.

I met Park at the military intelligence bureau office when he worked as a civilian officer after he was discharged from the Army. In 1949, he was nearly sentenced to death on charges that he led a Communist cell [in the constabulary army under the United States Army Military Government], a crime for which military prosecutors demanded capital punishment. The military court ultimately gave him a suspended jail term and he was discharged shortly after the ruling before working with us as a civilian officer.

In my time working with him, I began to greatly respect him. He wasn’t very talkative and always looked serious. But the way he handled tasks was precise and systematic. But I was still suspicious of his ideological leanings because of his past record. And with the war in full swing, I started asking myself whether he would desert us and join the North Korean Army.

Before the war broke out, he went to his hometown Gumi in South Gyeongsang for the anniversary of his mother’s death. On the day the war broke out, Park called me from Gumi and said, “I am trying to go back to Seoul but there’s no transportation going up there. Let the intelligence bureau director know that I’ll find a way.”

Park arrived at the Army’s Seoul headquarters at 7 a.m. on June 27 - two days after the war broke out. He said he reached the city by hitching a freight train. But since my brief meeting with him that day, I hadn’t seen him or heard from him.

Park’s whereabouts became a hot subject among the military officers walking with me down to Suwon. Some even made bets over whether he would join the Communist Army or join us in Suwon.

A couple of officers claimed Park must have already left for Seoul to join the invading forces. I bet that he wouldn’t turn his back on us, recalling my conversation with him on the phone two days earlier - but I wasn’t 100 percent sure either.

At around 5 p.m., we arrived at the Army’s temporary headquarters. I started searching for Park, and there he was standing in front of the gate at Suwon Elementary School where the intelligence bureau was set up.

“After all, you weren’t a commie,” I mumbled to myself.

He greeted me and patted me on the shoulder, and said, “It must have been really tough walking all the way down here.”

At that moment, all the doubts I had about him melted away.

At the makeshift military headquarters in Suwon, he was reinstated as a major. After learning about his reinstatement, I got a cloth lining from a military helmet, which had become scarce at the outset of the war. I put the lining onto his head, and Park smiled and said, “You’re appointing me.”

That moment marked the beginning of my journey with him toward the May 16 revolution and the completion of those goals.