Adobe promotes cloud for use by Korean firms

Adobe promotes cloud for use by Korean firms 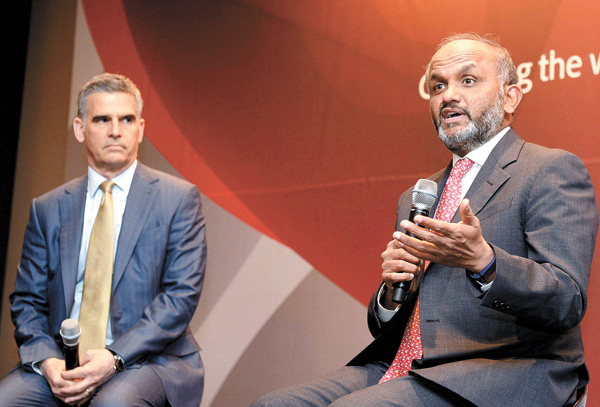 Adobe Systems CEO Shantanu Narayen, right, and CFO Mark Garrett speak about the company’s cloud-based solutions in Korea at a press briefing on Thursday held at Hotel Shilla in central Seoul. Provided by the company

Korea will be a land of opportunity for Adobe with its highly connected data network, said Adobe Systems CEO Shantanu Narayen on Thursday during a visit to Seoul.

Referring to Korea as a country at the forefront of technological innovation, Narayen said Adobe hopes to keep expanding its presence by partnering with local electronic device makers, manufacturers and airlines.

“When you think about the impact and influence that a company like Samsung has had on electronics and smartphones globally, it is clear that Korea has been at the forefront of a number of technology innovations,” Narayen said at a press briefing held at Hotel Shilla in central Seoul on Thursday. “Also, in terms of network connectivity, in which Korea is advanced, we think we have a unique opportunity to continue to grow our presence here in Korea.”

The company makes almost half of its annual revenue outside of the United States, of which a large portion comes from Asia.

Narayen said Korean business circles are on pace with global trends in terms of moving into the cloud environment from old-style packaged programs installed on hard drives.

He added that all sectors, from retail to tourism, must move their marketing strategy platform to the cloud, because the cloud platform compiles and analyzes data automatically, helping users provide more accurate and tailored services to individual customers.

Adobe, one of the world’s largest content creation software developers, gained fame for its document viewer and photo, audio and video editing programs, including Adobe Acrobat, Photoshop and InDesign.